GUEST BLOG: You brought your 2-year-old to Springfield to fight for clean energy?! 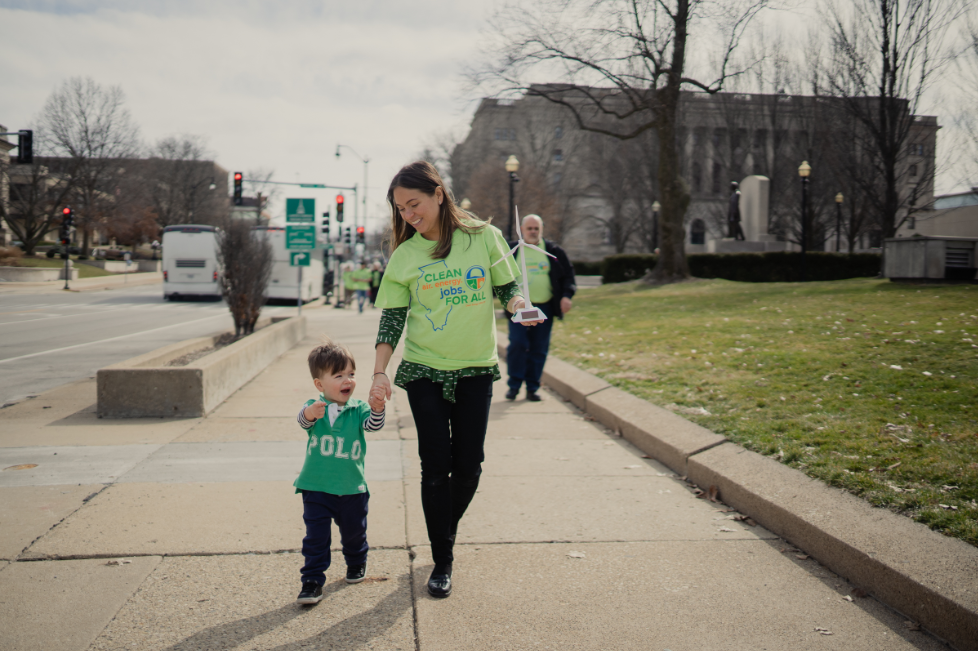 “I don’t think you should bring him,” my mom said.

“He’s not even three yet,” she worries.

Many might question waking up your toddler son at 5:30am on a Wednesday to hop on a three-hour bus ride to Springfield to lobby for the Clean Energy Jobs Act in Illinois. I did wonder if it would be safe and/or a good idea…but I also wondered if he’d enjoy the bus ride to our Illinois State Capitol building.

Everywhere I look in Chicago, I see the damage that our dependency on fossil fuels creates. Right in the heart of the West Loop (which was once a fairly residential area) I’ve watched large corporations come in, build huge buildings that eat up whatever little greenspace is available, and bring in lots and lots of traffic — and therefore lots and lots of air pollution.

As a mom, I want to do everything I can to ensure that my kids — and all kids, for that matter — have access to clean air, clean water, and a livable future. We have no planet B. It’s clearly time to take action. But how?

Which brings us back to the Clean Energy Jobs Act lobby day. Before bringing my son along, I did some recon. A month prior, at my first Climate Reality Chicago meeting, I was asked if I was going to the capitol. “Everyone should make it down to Springfield at least one day a year to see where all these decisions about them are being made.” I was wisely told. And if there was ever a day to give a damn, it seemed like showing up to advocate for the Clean Energy Jobs Act — a bill that would commit Illinois to 100% clean, renewable energy — on March 4th was it. So I got the schedule, the floorplans and polled others that had been there before. Everyone said the same thing: “It’ll make an impact.”

So if making the biggest impact on my son’s future meant bringing him to the capitol to lobby for said future, then my decision couldn’t be clearer. Plus, the field trip sounded fantastic to him, too. I guess you are never too young to be an activist.

I awaken to Colter pointing jubilantly out the window. The sleepy passengers near us wonder what all the excitement is about, then chuckle. He’s spotted a wind farm. Ever since he was gifted the book Baby Loves Green Energy, he’s taken great pride in identifying signs of people working together to help our planet.

“Yes, baby. That’s what we’re fighting for today — clean energy.” I decide the wind farm is a sign it’s time to assemble our mini solar-powered wind turbines and solar-powered LED flowers that we brought for our lawmakers. Colter helps, of course. He’s thrilled to watch his turbine spin right away, powered by the bit of sun that streams in through the window on a cloudy Midwestern morning. Everyone on the bus erupts into a chant: “This is what democracy looks like!” 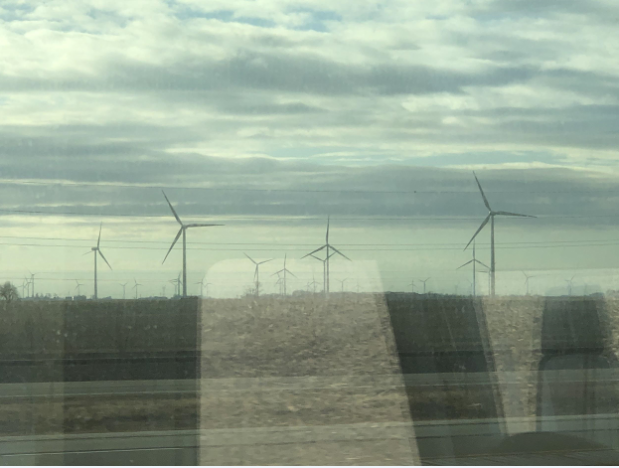 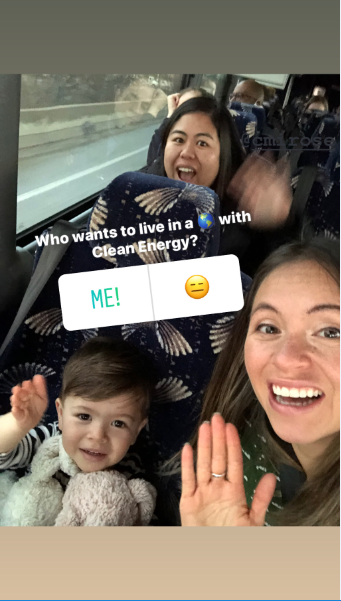 An hour later, we approach the capitol. It glistens in the sun. Crowds of activists proudly take pictures with their environmental signs on the front steps. It’s easy to feel defeated these days, where climate change and science are vilified by the highest office in the land. But the collective power of more than 700 people coming together from all across the state to fight for clean energy — well, it makes you believe in humanity again. “Let’s make a change today,” a fellow bus mate says. 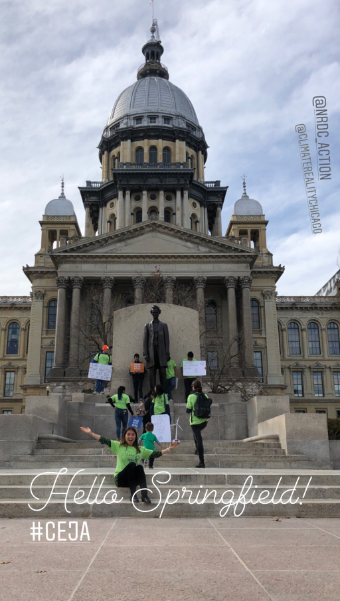 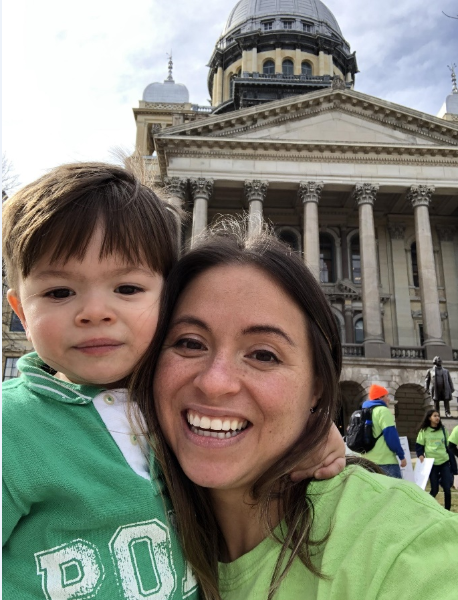 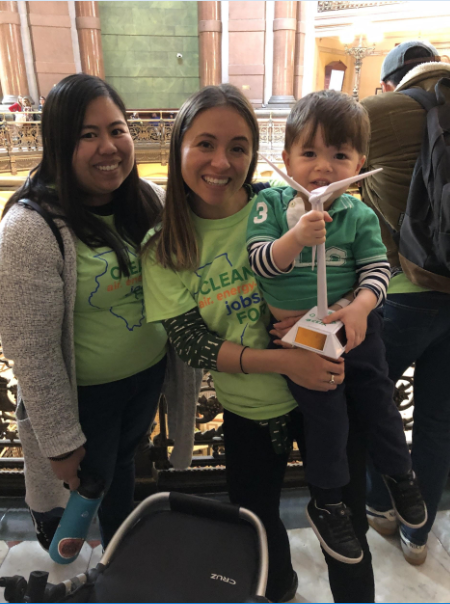 Before I know it, we are sitting directly in front of our Representative Jawaharial Williams, having a very real conversation. He wants to know how we know the bill will create all the jobs it says it will. And he wants to know how long the lag would be for helping those in the coal industry transition into clean energy jobs. The other women there really know the ins and outs of energy distribution in our state. So, we are able to discuss many aspects of the bill, which seems to cover it all — our health, our economy, our climate, and our future.

Thankfully Rep. Williams is already a cosponsor, but we can’t take any legislator’s support for granted. It’s helpful to understand the pressures and concerns he’s getting from other sides as well. I make my best emotional plea as a constituent and mother to keep fighting for our world, because we all need clean air and clean water TO LIVE. Colter sleeps peacefully in the stroller, missing all my cues to make his points;). But after a solid nap and lunch, we get to see Rep. Williams again outside the House Chamber, where Colter excitedly gives him the mini wind turbine at last! 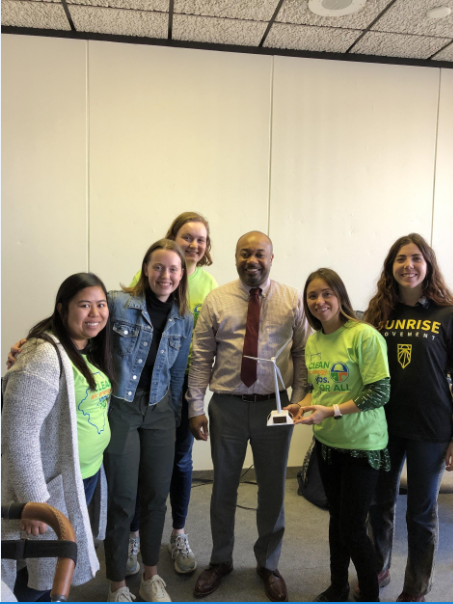 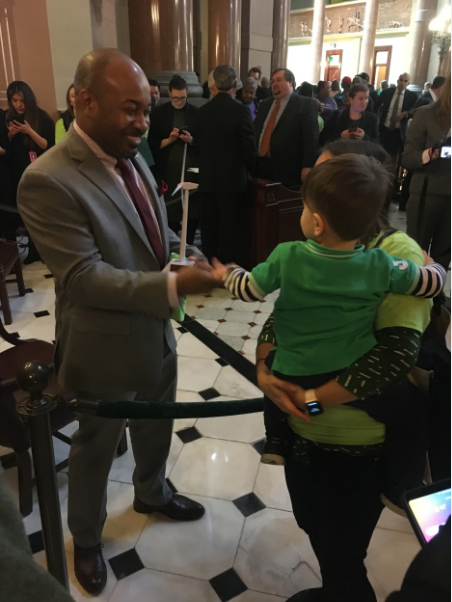 We are lucky enough to catch Senator Patricia Van Pelt returning from lunch. She lets us know that she supports the bill 100%, and Colter gives her a solar-powered LED lily as a thank-you. She says that she’s “on board because it’s simple — we need a future. And if we don’t fight for this, then nobody is going to.” 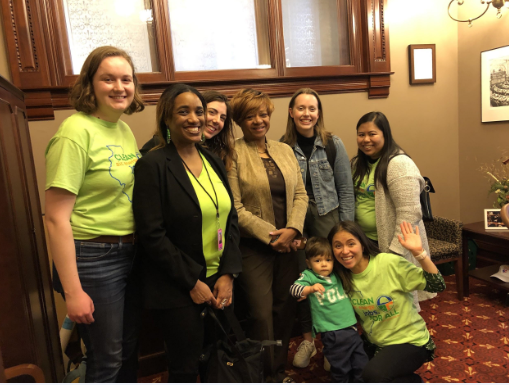 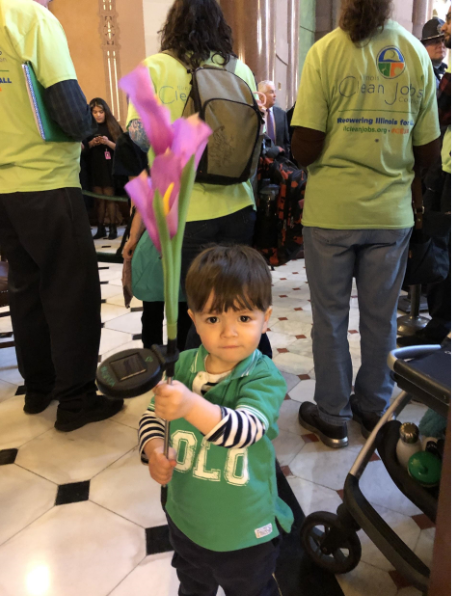 After that, everyone gathers in the Capitol’s rotunda to rally. Dozens of people share why we need the Clean Energy Jobs Act now — because we can’t let any more time go by. I couldn’t help but hold Colter up to cheer when speakers would say, “We are doing this for our Future!” 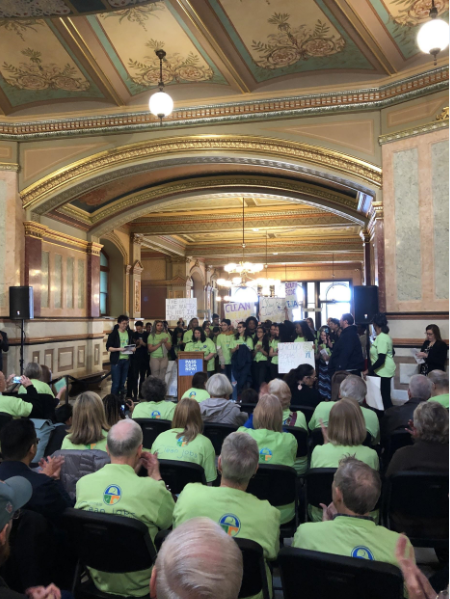 The day was incredibly inspiring, and I’m so glad we decided to go. I don’t know about other parents, but I do know this: my kids won’t ask me if I did my part to help our planet and our future, because we are doing it together.

Couldn’t make it to the lobby day? You can still make your voice heard! Here’s how: