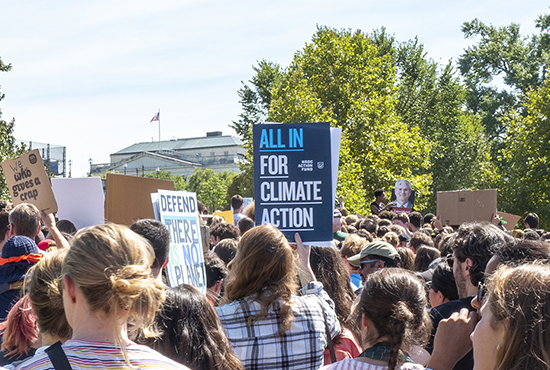 This was the year that the climate crisis broke through, with a massive youth-led movement taking to the streets in cities across the globe and the international media amping up coverage of climate-fueled storms and wildfires, climate science and climate politics.

It was the year the 2020 U.S. presidential candidates finally had to commit to bold climate action to compete in a crowded Democratic primary field. And it was the year newly-elected governors took concrete action in states across the country to grow a clean energy economy.

But 2019 was also the year the current president doubled down on his climate denial, forcing state governments, municipalities, and corporations to sidestep the Trump administration to keep moving toward the goals of the Paris Agreement.

The NRDC Action Fund’s climate advocacy work at the national, state and local levels also shifted into high gear in 2019. We launched All In for Climate Action, our new platform for especially committed activists who sign up to engage in both online and offline climate advocacy at key moments. And we partnered with our friends at EDF Action to build the “Green Team,” a group of constituents in key House districts who are showing up in district offices and at town halls to lobby their members of Congress on climate, clean energy, and other key environmental issues.

Here’s just a sample of the many climate-related campaigns the NRDC Action Fund engaged in this year to enhance the policy work of NRDC’s climate and clean energy programs.

January 2019 – The Action Fund asks its supporters and activists to urge federal lawmakers to make climate change a top priority in the new Congress. Tens of thousands of our list members contact Congress on the issue. House Speaker Nancy Pelosi creates the new Select Committee on the Climate Crisis.

February 2019 – Two House committees, now under pro-environment leadership, hold the first climate-related congressional hearings in more than six years. To support the hearings, the NRDC Action Fund launches its first peer-to-peer texting campaign focused on lobbying members of Congress on the committees. More than 650 calls are routed to these members, urging them to attend the hearings and act on climate change.

March 2019 – Senate Majority Leader Mitch McConnell holds a stunt vote to get senators on the record regarding the Green New Deal resolution. The stunt backfires when Democratic members vote “present” as part of a strategy by the NRDC Action Fund and the environmental community to highlight McConnell’s lack of any plan to address the climate crisis.

April 2019 – After intense lobbying by the NRDC Action Fund and the environmental community, the full House passes H.R. 9, the Climate Action Now Act, the first major piece of climate legislation to have received a House vote in nearly a decade. NRDC Action Fund alerts and ads generate nearly 50,000 messages and more than 1,200 phone calls to Congress, marking an important milestone after the 2018 federal elections usher in a “Green Wave” of pro-climate lawmakers.

November 2019 – The 100% Clean Energy Economy Act is introduced in the House with more than 150 original co-sponsors following a months-long campaign by the NRDC Action Fund to build support for the measure. Tens of thousands of activists reach out to their members of Congress to demand that the U.S. transition to 100% clean energy by 2050.

March 2019 – The NRDC Action Fund launches digital ads in Florida highlighting the bipartisan nature of opposition to expanding offshore drilling. The ads ask Floridians to contact Sens. Marco Rubio (R) and Rick Scott (R) to urge them to oppose offshore drilling along the state’s coast. Rubio and Scott eventually co-sign a letter to the Interior Department asking that Florida be exempted from the upcoming 5-year offshore drilling lease plan.

April 2019 – The NRDC Action Fund launches an Arctic National Wildlife Refuge legislative action alert that spurs nearly 30,000 of our activists to urge their representatives to sign onto H.R. 1146, which would block dangerous oil drilling in the Refuge.

April 2019 – The NRDC Action Fund celebrates an important victory in the fight against President Trump’s “drill everywhere” agenda; a ruling in federal court and growing political pressure from lawmakers and their constituents combine to force the Interior Department to delay its plans to greatly expand offshore drilling along much of America’s coasts. Kevin Curtis, executive director of the Action Fund, reacts to the news, telling Bloomberg Environment, “bipartisan opposition to offshore drilling from a growing number of local, state, and federal officials across America has made this a political loser for President Trump and he knows it.”

January 2019 – The NRDC Action launches a campaign opposing the Senate confirmation of former coal lobbyist Andrew Wheeler, President Trump’s pick to head the Environmental Protection Agency. At his confirmation hearing, Wheeler tells senators he does not believe climate change was the “greatest crisis” threatening the world and defends the president’s rollback of the Clean Power Plan and other Obama-era initiatives designed to curb U.S. greenhouse gas emissions. The NRDC Action Fund campaign drives more than 42,000 members and activists to contact their senators to oppose Wheeler’s confirmation.

Advocating for Climate Progress at the State and Local Level

Pennsylvania – January 2019 – The NRDC Action Fund urges constituents to oppose a state bailout of old and unprofitable nuclear power plants without a bolder commitment to safer clean energy alternatives. The campaign helps to force a delay in the effort to consider legislative changes that would favor future clean energy development. The failure of the measure in this legislative session prompted an announcement of the closure of the Three Mile Island nuclear facility, site of the worst nuclear plant accident in U.S. history.

Nevada – April 2019 – Gov Steve Sisolak (D) signs legislation increasing to 50% the amount of renewable energy that must be included in Nevada’s statewide power mix, a huge victory for the climate and public health. The NRDC Action Fund had launched a lobbying campaign that helped to forge bipartisan consensus and resulted in the unanimous passage of the measure in the state legislature.

Colorado – May 2019 – In Colorado, NRDC Action Fund advocates successfully lobby for measures to dramatically increase the number of electric vehicles on the roads to limit greenhouse gas emissions and cut down on the smog that often chokes cities like Denver. The new laws require automakers to make electric vehicles more widely available and they provide funds for expanding access to charging stations across the state.

New York – June 2019 – New York state enacts one of the country’s most far-reaching climate solutions bills, marking a huge victory for both NRDC and the NRDC Action Fund, which had urged its supporters repeatedly to lobby their representatives in Albany to pass the “Climate and Community Protection Act.” New York joins California in taking leadership roles among a growing number of states where climate progress is a major focus for the NRDC Action Fund.

Oregon – June 2019 – The NRDC Action Fund’s push for a strong clean energy jobs bill in Oregon is not enough to overcome an extraordinary last-minute move by Republican senators to block its final passage. (A group of Republican senators fled the capitol, denying state Senate leaders a necessary quorum and prompting Gov Kate Brown (D) to send state troopers to search the state and return them to the capitol in Salem.) Oregon Senate President Peter Cortney is forced to coax some GOP senators to return by assuring them the clean energy bill would not be passed.

Illinois – September 2019 – The NRDC Action Fund launches a campaign to help pass bold climate action – the Clean Energy Jobs Act. Digital ads and action alerts draw thousands of messages to state legislators urging them to sign on as supporters of the measure, which is set to be considered in early 2020.