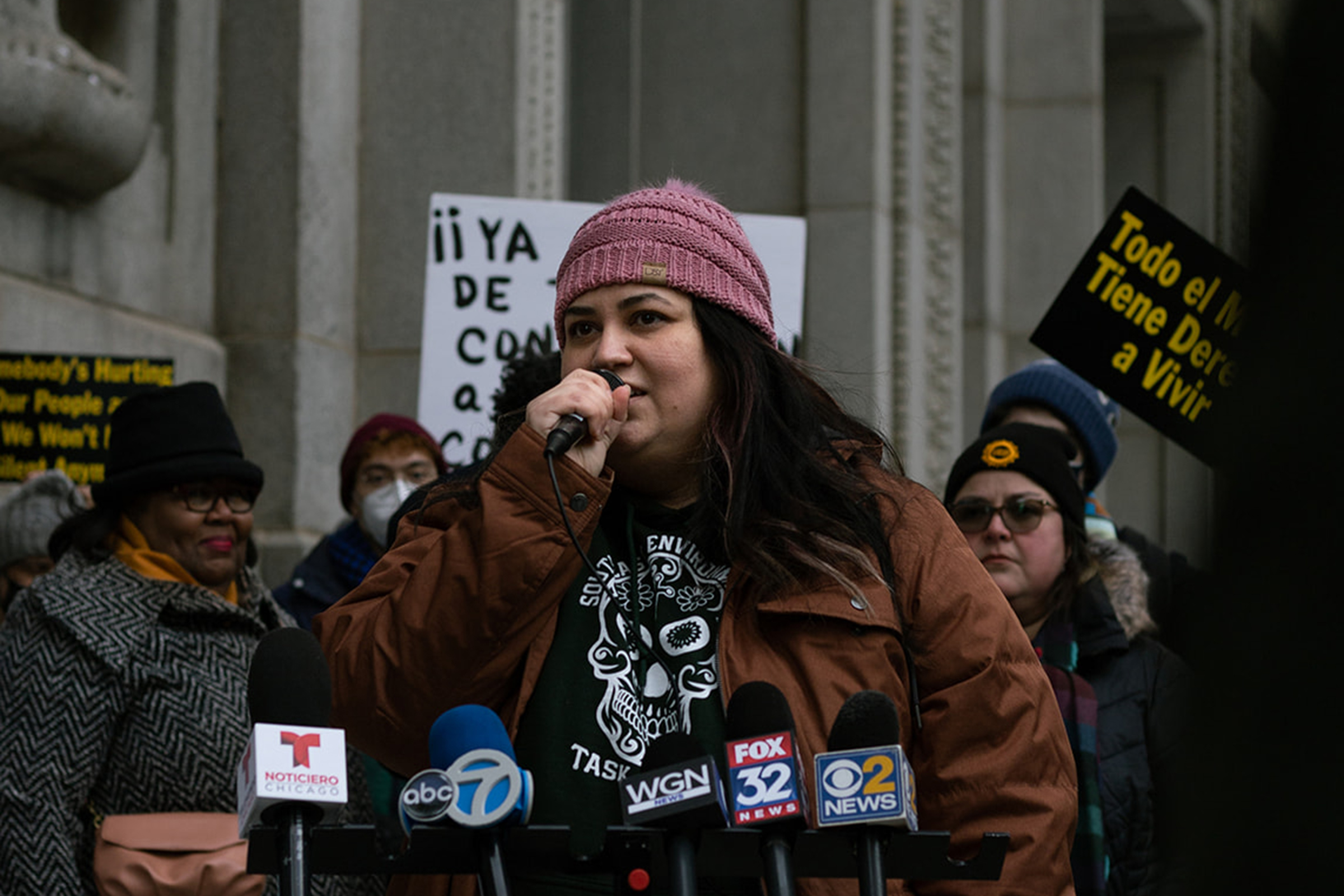 The yearslong fight shed light on flaws within the city and state’s industrial permitting process.

The most intense environmental justice fight of my life, which led to years of advocacy by my neighbors and our allies—including a historic monthlong hunger strike—centered around asking the city of Chicago to deny a permit.

This fight began in 2018, when a massive car-shredding facility proposed moving its operation out of the gentrified area of Lincoln Park to make room for the multibillion-dollar Lincoln Yards development—to my working-class community of color on the city’s Southeast Side. The relocation kicked off a yearslong struggle to stop RMG-General Iron from joining the scores of polluters already operating in my neighborhood.

Although it was only one episode in the decades of environmental racism that my neighborhood has faced, it exposed the structural problems that encourage polluting industries to accumulate in communities like mine. Along with shortcomings in federal and state environmental laws, Chicago’s zoning laws and land-use practices continue to deepen segregation and create sacrifice zones where neighbors subsidize industry profits with their health and welfare.

Ultimately, the Lightfoot administration and the Chicago Department of Public Health (CDPH) denied a permit for RMG-General Iron to operate in our community due to the “potential adverse changes in air quality and quality of life that would be caused by operations, and health vulnerabilities in the surrounding communities.” My neighbors and I would have used much stronger language to describe the injustice of dumping this massive industrial facility on an overburdened community.

In the end, we were joined by hundreds of public health and healthcare professionals and activists—even EPA Administrator Michael Regan called for an end to this textbook case of environmental racism. And the U.S. Department of Housing and Urban Development told the city not to move forward with a permit during the agency’s pending civil rights investigation.

For the first time in four years of dealing with General Iron, instead of protests there were celebrations. As the Southeast Side celebrates, we continue to advocate for solutions to the structural racism that allowed this fight to last for years.

Although we’re exhausted, we know the battle isn’t over. Underlying our fight were much bigger issues about the city’s history of segregation and racism that have allowed communities of color to suffer a lesser quality of life than wealthy white residents for decades.

According to the CDPH’s Health Impact Assessment of RMG-General Iron, life expectancy for Southeast Side neighborhoods is two to nearly seven years shorter than in Lincoln Park. All three Southeast Side community areas rank in the bottom half of all Chicago’s community areas for life expectancy, cardiac and respiratory disease, and self-rated health, among other metrics. The CDPH has also identified these areas as having among the lowest child opportunity in the city, based on educational, health and environmental, and social and economic data. To me and other members of my community, this means we need to stop treating heavy industry only as an answer to economic and social hardships—and start considering it a source of them.

More work needs to be done to ensure this doesn’t ever happen to any other community. Neighbors shouldn’t have to disrupt their lives and fight for years with the very government agencies entrusted with protecting our health every time a polluter wants to set up shop. This fight has clearly demonstrated that there is something terribly wrong with the city and state’s industrial permitting system.

Our environmental justice organizations and our partners will continue to advocate for a much-needed overhaul of this system.

The city’s decision supports concerns we have voiced all along about a history of environmental noncompliance by this company. It also cites disturbing new data on extremely high levels of lead in soil at the proposed site—another issue we have raised for years.

This underscores the importance for the city council to adopt the cumulative impacts ordinance, which Mayor Lightfoot has promised to introduce. The ordinance would keep other General Irons from trying to infiltrate already overburdened Black and brown communities. We’ve had to fight battles against manganese contamination, lead, proposed gasification and cement plants, petcoke, and facilities like General Iron. Our lives would look much different if the city enacted this ordinance and addressed the impact of combined pollution that communities like mine already face when industry seeks to move into our homes. It’s time for the city council to act instead of continuing its role in a pattern of local laws that only worsen the problem.

Next, we also need to pass a statewide environmental justice bill, creating a process where communities are involved and have a say when these permits come up in their neighborhoods, and where standards reflect and address the cumulative and disparate burdens our communities bear. People deserve a voice in determining what facilities get to move next door.

The Past Four Years

Even before General Iron threatened to come to the Southeast Side, we had already fought back against several polluters, like facilities that stored mountains of toxic petcoke and neurotoxic manganese. The Southeast Side, like other communities of color in Chicago, is overburdened with industry that brushes up next to our homes, parks, and schools.

Throughout these last four years, we’ve felt determined and unwavering but also at times dejected and lacking hope. Looking at the city’s track record of environmental racism in zoning and land-use policies made it hard to see the light at the end of the tunnel. But we are grateful that after all the press conferences, federal civil rights complaints, letters, protests, and a hunger strike, we get to stand in that light today.

The people who came together for this cause are as diverse as they come: young and old, Latino, Black, white, residents, teachers, doctors, politicians. They range from Alderman Byron Sigcho Lopez (who joined the hunger strike) to EPA Administrator Regan (who called on Mayor Lightfoot to address civil rights issues with the proposed operation and the HUD staff and leadership who worked on the community’s civil rights complaint) to the more than 500 doctors and healthcare professionals who wrote letters on our behalf to the mayor and the CDPH.

And we sincerely couldn’t have done this work without the leadership of our youth—so many of them spent the summer after their high school graduation taking on city and state officials and leading protests. “As a recent high school graduate, a multitude of inequities that I may not have understood before are coming into focus,” wrote Adelina Avalos, Midwest youth ambassador at NRDC. “Apart from being concerned about exposures to brain damaging chemicals in my neighborhood, I worry about what the move of this facility will mean for the health of my community, and I wonder just how soon we’ll be hit with yet another environmental assault.”

I’m proud of the work they’ve done and hope this victory reminds them they are limitless.

My neighbors and I had to take matters into our own hands to arrive where we are today. Avalos pointed out an unfortunate lesson our youth quickly learned: “The harshest reality to come to terms with is that the government agencies that are supposed to protect us equally often toy with the livelihoods of working-class communities of color. While we may not be able to count on our government, I find comfort in knowing that I live in a community of care, where we look out for one another and are collectively committed to fight for a greener, healthier environment, so that future generations won’t have to endure the same struggle.”

Victory for Beyond the Southeast Side

This was an exceptional fight for NRDC. It was grassroots at its core. It was out of the box, and I hope that it will lead to deep and historical change for Chicago.

My hope is that our victory won’t be ours alone and that communities across the city and country will also be able to breathe clean air. I hope other decision makers will learn from what happened here on the Southeast Side, about the need for true community engagement and transparency.

I have been fighting General Iron’s relocation for half of my son’s life. My job as his mother is to protect him and this accomplishment will change the future for his generation.

Gina Ramirez is the Midwest outreach manager at NRDC.

Illinois must begin dismantling the environmentally racist policies that have put the health of families at risk for decades.…