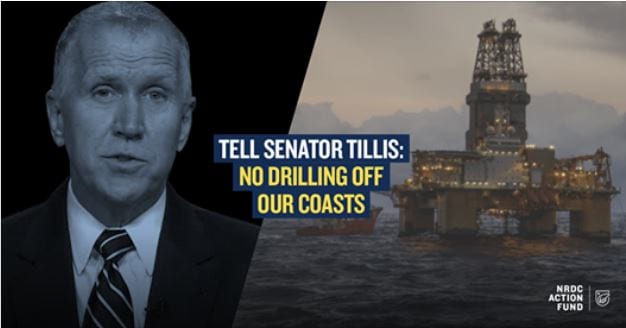 (Washington – December 11, 2018) Sen. Thom Tillis (R-N.C.) should protect North Carolina’s beaches and oppose the Trump administration’s plans to open waters off North Carolina’s coastline to dangerous oil and gas drilling, according to the NRDC Action Fund, a national environmental organization, which is launching an ad campaign today. The group’s digital ads urge his constituents to contact Sen. Tillis to express their opposition to expanded offshore drilling.

The Trump administration recently gave companies permission to begin exploring for oil and gas off the Atlantic coast using deafening seismic air guns — which experts say will harm thousands of whales, dolphins, and other marine mammals, including endangered species like the North Atlantic right whale.

“Seismic testing is a first step toward dangerous oil rigs off North Carolina beaches,” said Kevin Curtis, executive director of the NRDC Action Fund. “Senator Tillis should make it clear that he won’t stand by and allow the Trump administration to gamble with North Carolina’s economy and the health of its coastal communities.”

North Carolinians oppose oil drilling off the state’s coast, according to a poll this year, with 65 percent of respondents saying it would be too risky for a coastal economy that relies on fishing and tourism.