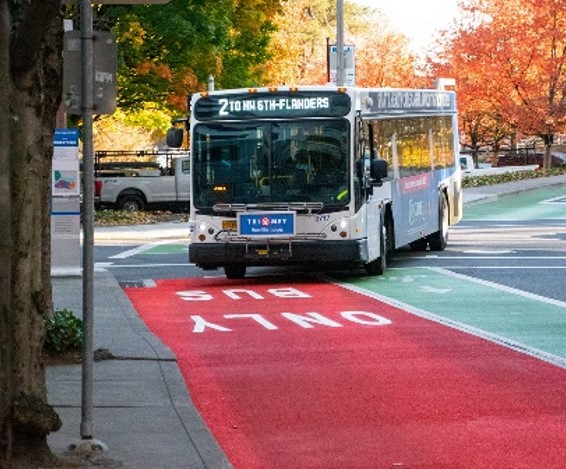 The city’s Rose Lane Project is an experiment with transit priority.

Update, Feb 14: Last night, the Portland City Council passed the Rose Lane Project! Dozens of members of the public spoke up in support in a room full of Councilmembers, city staff, and community members alike proudly sporting red rose pins, and then the Council unanimously approved a plan to free many of its buses from traffic with bus-only lanes. Now over 20 projects will move forward, many this year, to make climate-friendly public transit rapid and reliable.

Councilmember Chloe Eudaly, who spearheaded this project, spoke about her reasons for leading on this.

“The facts are undeniable—climate change is here, we’re already experiencing its consequences and it hits our most vulnerable community members the hardest. We know that transportation is a massive contributing factor to the climate crisis.”

She added, “We can’t keep asking people of color, lower-income individuals & other underserved communities to shoulder the burden of getting us closer to our climate goals … Portlanders who have options, make the right choice: Get out of your car and onto transit whenever possible.”

When it comes to the complex question of how to reduce carbon emissions from transportation, one answer is relatively simple: We need more people to get on the bus.

Cities are the perfect place to focus on this smart climate solution, especially while federal action is lagging. Across the nation, cities are taking action, policy by policy and street by street, in ways that add up to big climate impacts.

A civic love letter, just in time for Valentine’s Day

In Portland, Oregon, the Portland Bureau of Transportation (PBOT) is doing just that: rolling out the red carpet for its city buses. If passed, the Rose Lane Project, spearheaded by Portland City Commissioner Chloe Eudaly, will bring dramatic improvements to some of the Rose City’s busiest and most delayed bus routes.

The Rose Lane initiative goes to the City Council for adoption on February 13.

Some Rose Lanes will be just what you might imagine: bright-red coats of paint designating bus-only lanes, or bus-priority lanes. In other places, the treatment might be more technical, like a traffic signal that gives buses the jump at busy intersections.

Whether it’s a green light or a red lane, the project will move buses faster. And that will get far more people where they need to go without having to sit in traffic.

The numbers add up

Portland is one of several U.S. cities jumping on the bus-boosting bandwagon to satisfy both commuters and meet the city’s climate and equity goals. Buses and bikes can be seen whizzing past heavy traffic via recently implemented bus-priority lanes in Los Angeles. San Diego recently completed three miles of bus-only lanes on a route that serves 10,000 people daily. Data from the Boston area show bus-only lanes have sped up some commutes by up to 10 minutes.

Ten minutes per ride might sound small, but that’s almost two hours saved per week for every person on that bus, or a full work day every month. If 10,000 people are saving that much time, that’s a huge improvement to the quality of life in the city. It’s also an improvement in the lives of people who may have fewer resources, who may be unable to afford a car or physically unable to drive. Moving the bus faster also attracts people who have more options, who can choose to ride.

That choice is critical; today almost 60% of Portlanders still drive alone to work. Meanwhile, the city’s public transit ridership has stagnated over the last few years. This has to change—and fast—if Portland is going to reach its adopted goal to reduce drive-alone trips to 30% by 2035.

As the video above shows, buses are incredibly efficient. Buses can fit more than 50 riders in the same road space as two or three cars. They can carry 12 times as many people as a car with about the same amount of emissions. They’re a powerful tool to fight climate change.

That’s why Portland hopes to more than double its transit ridership rates—to 25 percent—by 2035. The Rose Lane Project is the latest in a string of policy initiatives (including the Enhanced Transit Corridors Plan and Central City in Motion Plan) to help more people choose to ride.

So what keeps people from getting on the bus?

Ideas42, an American Cities Climate Challenge partner with expertise in the science of behavior change, is working with the City of Portland to explore barriers for potential riders. Ideas42’s work and a recent survey conducted by the Portland Bureau of Transportation (PBOT) add to national findings that the top two factors in travel choice are speed and reliability.

We care about how fast we can get where we need to go, and how certain we are to arrive on time.

This is where a city bus can become a struggle bus: unlike rail lines, buses have to fight traffic along their routes, leaving frustrated travelers stuck at bus stops contemplating whether driving would have been the better choice.

But many people don’t have that choice. Both in Portland and nationally, people from communities of color and low-income communities are more likely to be transit dependent than white, wealthier travelers. When traffic slows buses and makes them less reliable, it disproportionately impacts vulnerable, historically disadvantaged community members.

In Portland, communities of color are more likely to be transit dependent and have less access to vehicles than white residents

Better bus lanes are a quick, low-cost way to take great tools we already have on our streets and get them unstuck, freeing buses and all their riders from traffic.

That’s what will help people choose buses: making them fast and reliable. And it doesn’t always take miles of bus lanes. Sometimes it can take a more targeted approach.

In 2019, PBOT—in partnership with the transit agency TriMet and Multnomah County—focused on three key bottlenecks in the Central City. These “big three” projects from Portland’s Central City in Motion Plan targeted congested areas that 14 different bus lines run through, serving more than 75,000 people each day.

These took a more surgical approach—the longest is only half a mile—but these focused fixes dramatically improved speed and reliability to smooth out the rider experience along the entire bus route.

The next big move: Rose Lanes for the Rose City

Given the success of these targeted fixes, we can’t wait for the big move. If the Rose Lane Project is approved by the Portland City Council on February 13, we’ll see dozens of bus priority projects rolling out around the city this year and next.

To make projects happen this year, the city has taken a quick and nimble approach: with support from the American Cities Climate Challenge, including partners Nelson\Nygaard, NRDC, and Delivery Associates, Portland fast-tracked Rose Lane Project design in a matter of months. To ensure a smooth roll-out, the city is “piloting”—using inexpensive materials, monitoring progress, and making changes along the way as needed.

The only thing better than a dozen red roses for Valentine’s Day? Dozens of red Rose Lanes that benefit people and the planet.

Help the city fight climate change by commenting on the draft Existing Building Electrification Plan, which will empower locals…

A New Honolulu Policy Could Cut Costs, Save Energy and Water

The NRDC Action Fund is driving climate action in cities across the country through the American Cities Climate Challenge.…

The NRDC Action Fund is driving climate action in cities across the country through The American Cities Climate Challenge.  …