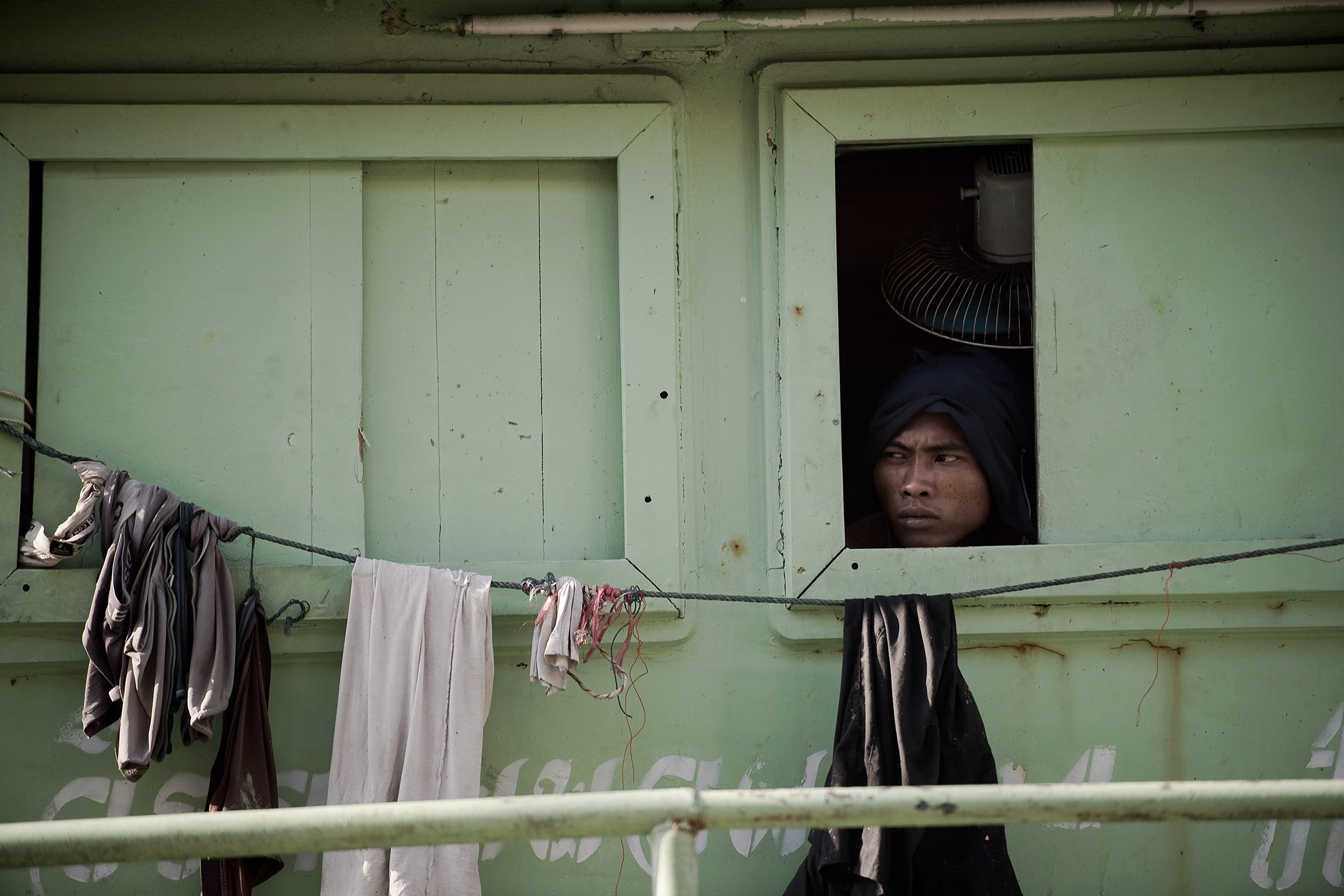 Forced labor, human trafficking, and worse shouldn’t be a part of our food supply. Here’s how we stop it.

When you hear the phrase illegal fishing, what do you think?

They’re certainly part of the picture. But there’s a much graver human cost hiding in plain view—one that involves kidnapping, human trafficking, forced labor, and even murder.

Illegal fishing is a humanitarian disaster fueled largely by the economics of a complex global food system. American consumers play a big role, in part because U.S. seafood laws have done little to deter it. In fact, nearly a third of the wild-caught seafood sold in the United States each year is illegal or unreported.

The consequences go beyond the destruction of marine ecosystems. Illegal fishing operators have kidnapped people off the street and forced them to work as crew members with little to no pay, food, or sleep—and then, sometimes, these victims are dumped off at far-off ports or abandoned at sea.

These practices are so well concealed that U.S. consumers have unwittingly turned a blind eye to this reality, and the U.S. government has not yet stepped up to help stop them. But Congress now has the power to pass legislation that would dramatically enhance U.S. leadership in the fight against illegal fishing and the human rights abuses that too often come with it. The House of Representatives has passed significant reforms to combat illegal fishing and forced labor through the COMPETES Act (H.R. 4521), and it is critical that these provisions are enacted into law.

In 2014, a fisherman left his cell phone in a taxi in Fiji. The phone turned out to contain a video of a group of men treading water in the open ocean. A voice is heard from off camera. “Shoot! “Shoot! Shoot!” Gunshots ring out. Blood reddens the seawater. A body floats lifelessly. The video cuts to a group of armed men posing triumphantly on a ship.

The authorities made virtually no progress on the case for six years. Without any formal complaint, or any indication of who the victims were, there was very little incentive for any country to investigate. Fishermen in the region claimed the victims were pirates, giving law enforcement an excuse to let the case slip.

“Conflicts and fights and murders on the high seas, on fishing boats, is relatively common,” said Graham Southwick, president of the Fiji Tuna Boat Owners Association, at the time of the video’s discovery. “The report usually comes back that either he fell over the side, or whatever, and then there’s nothing much anybody can do very much about it.”

The Trygg Mat Tracking (TMT), a nonprofit intelligence-gathering organization based in Norway, eventually determined that the incident occurred in the western Indian Ocean. The shots were fired from the Taiwanese-flagged Ping Shin 101, a ship that has since sunk. Informed by TMT’s tireless research, Taiwanese authorities arrested the ship’s captain, Wang Feng Yu, a Chinese national, in 2020—eight years after the video was recorded. Wang appears to have continued his career during that time, earning a reputation as a brutally abusive ship captain.

According to interviews of crew members conducted by private investigator Karsten von Hoesslin, the murdered men were unarmed and had only fishing equipment on their boat. Suspiciously, the incident was the second time within a week that deckhands on the Ping Shin 101 identified and killed people they claimed were pirates.

Much remains unknown about the 2012 shooting, most importantly the identity of the victims. But while such video or photographic evidence is rare, it is well understood that lawlessness of all forms, up to and including murder, is disturbingly common in the fishing industry.

Six years ago, Indonesian crew member Urip Muslikhin was reported lost at sea, washed away while holding a net on a Taiwanese fishing boat. Satellite data acquired by Greenpeace, however, showed that Muslikhin’s ship continued fishing in the moments after his reported disappearance. Muslikhin’s body was later found aboard the ship, with indications that he had been physically abused before his death. There was shockingly little done to identify and punish the perpetrators.

Crew members aren’t the only ones who disappear from fishing boats. In the last few years, at least 18 fisheries observers assigned to ships to prevent illegal fishing have gone missing in the waters around Papua New Guinea.

From left: Kyaw Naing, a slave from Myanmar, reaches through the bars of his cell at a fishing company compound in Benjina, Indonesia; Thai officials inspect the graves of foreign fishermen in the Aru Islands, Indonesia. (Dita Alangkara/AP [2])

Some acts of abuse are horrifyingly systematic. In 2015, an Associated Press investigation prompted authorities to raid a fishing village in Indonesia where more than 300 men were being held captive and forced to fish under brutal conditions. Some had been there for years. The local police also uncovered a graveyard where the camp buried men who had been worked to death.

Private companies aren’t doing their part, either. Soon after news of the slave camp surfaced, it became apparent that some of the biggest corporate names in America had bought and sold fish caught through trafficked labor.

Overfishing affects food security in myriad ways, and as those impacts ripple through the global marketplace, desperation can follow. Between 1930 and 2010, biological abundance in some of the planet’s largest fishing regions dropped up to 35 percent. The most overfished areas tend to be close to shore, causing fishing vessels to venture farther out, using more fuel and worker hours.

Going farther from shore costs money, but fishing operators have limited ability to pass those expenses onto consumers. Increases in price drive consumers away from seafood and toward other protein sources. In recent years, the prices for some fish have bottomed out, putting extra pressure on fishing operations, especially those that respect human rights and environmental regulations. For instance, tuna prices in Thailand and Ecuador, which are often used as global benchmarks, dropped approximately 40 percent between 2013 and 2016.

If revenue can’t rise, and with fuel costs unavoidable, vessel owners pass those pressures down to workers—whose wages account for up to 60 percent of operating costs. They force crew members to spend more time at sea with less pay and less safety. Recruiting people to work under these conditions is nearly impossible, so many unscrupulous operations have resorted to seeking out migrant workers from poorer developing countries that lack sufficient job opportunities. Several recent investigations into the fishing industry in the United Kingdom and Ireland have found such cases of labor abuse; in Ireland, for example, 12 cases of alleged human trafficking were reported to police between July 2017 and April 2018. Four of the abused men had originally traveled on tourist visas from West Africa to Belfast intending to work for British trawlers before being forced to work as slaves on Irish vessels instead.

There is no reason to believe these abuses won’t continue. Nearly two-thirds of commercially valuable fish are being fished to the maximum limit that scientists consider sustainable, while the remaining third is overfished. Bad actors are scavenging the seas to find fish that they sell at rock-bottom prices, while their workers absorb the losses.

The onus is on governments around the world to be more visible as a deterrent to illegal fishing. “[E]conomic crime, which is an organised action, always looks for that moment when monitoring by state authorities is weak or absent,” says Mas Achmad Santosa, executive director of the Indonesia Ocean Justice Initiative, a Jakarta, Indonesia–based think tank supporting policies to combat illegal fishing, including those that would improve enforcement in waters outside national boundaries.

What We Can Do

The United States is one of the largest consumers of illegally fished seafood. Both the global and U.S. systems for blocking illegally caught fish are riddled with holes. Here are just a few examples: 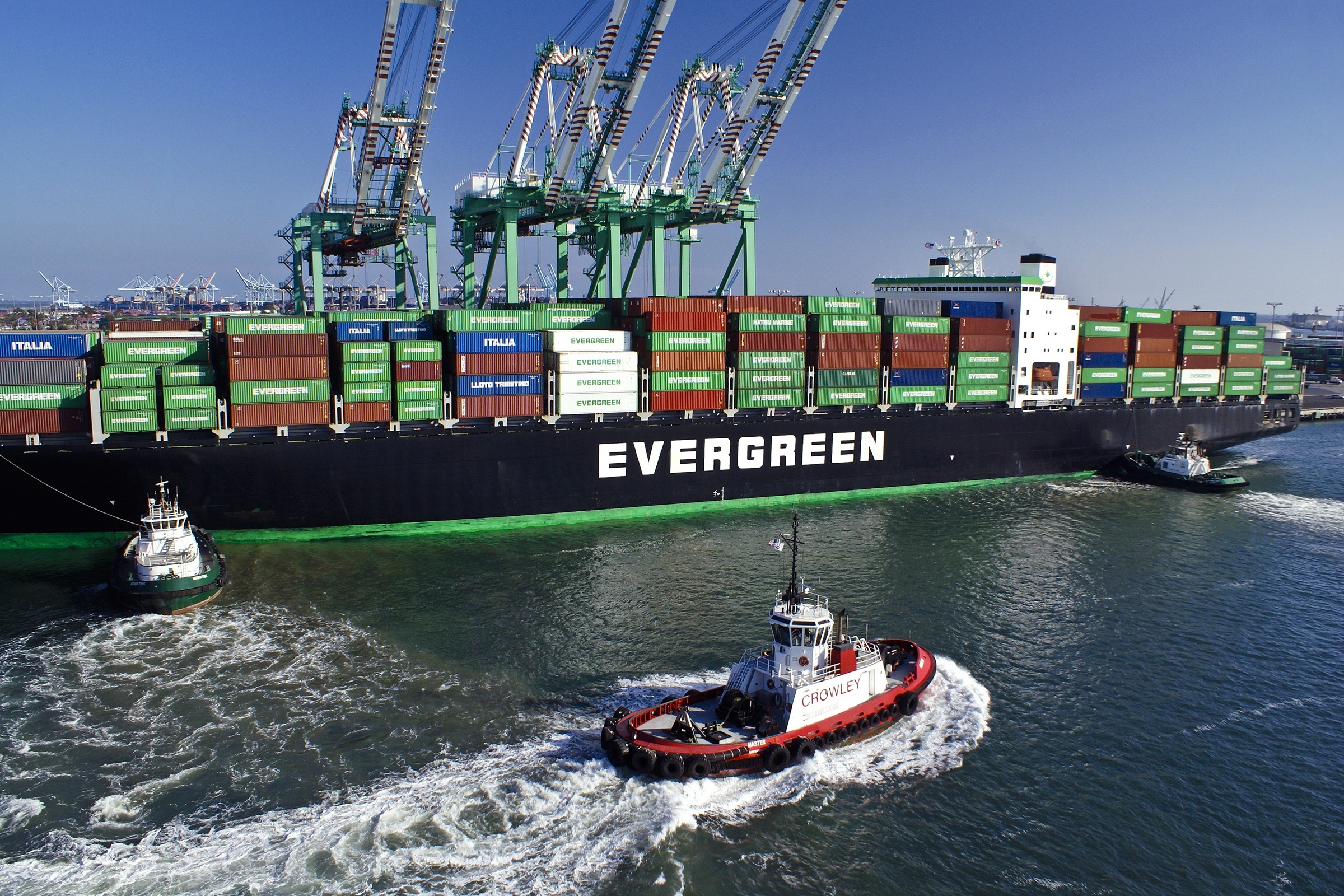 A cargo ship at the Port of Los Angeles in San Pedro, California (Michele Burgess/Dreamstime)

There is so much more we can do to stop illegal fishing, safeguard marine ecosystems, and protect the lives and freedom of abused workers. The first and most obvious step is to illuminate what happens out at sea and require traceability for all seafood. With modern technology, we should be able to document every fish’s journey from ocean to plate. We can require fishing vessels to leave their tracking equipment on at all times and to identify their crew and document fair labor practices. The good news is that we don’t have to devise an entirely new regulatory regime to implement these changes—we can strengthen and update current laws and require U.S. government agencies to work together.

It’s also time for the U.S. government to make a concerted, collaborative effort with the international community to pressure countries that are allowing, or profiting from, illegal fishing. Some nations even invite unethical operators to fly their flags on their ships with few or no consequences for violating international law.

Just as the public demanded that many large companies develop systems to get sweatshop labor out of their clothing lines, we must stand up against forced labor within seafood supply lines.

You have a voice. Members of Congress are working to stop the flow of illegal seafood into the United States through the COMPETES Act (H.R. 4521) and other proposals—and your representative should be one of them. Call. E-mail. Demand. Tell them to stop sitting by while human lives are sacrificed for our fish dinners.