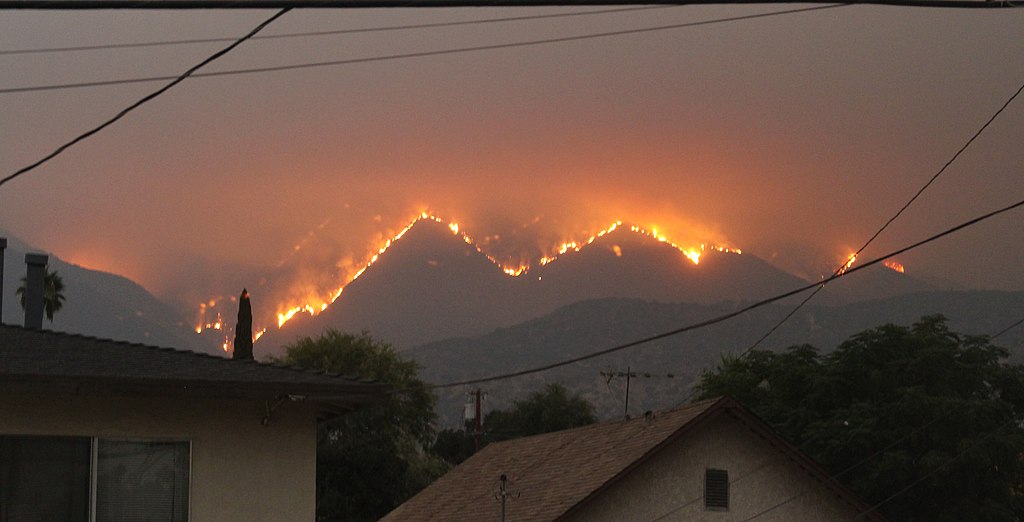 Seldom is the choice between presidential candidates spelled out more clearly than it was on Monday. With wildfires torching more than five million acres from Washington state to the Mexican border, former Vice President Joe Biden connected the dots between the human toll the fires are taking and the ways the climate crisis is driving the devastation, before rallying the nation around a common response.

“Think of it from the view on the ground, in the smoldering ashes,” said Biden. “Loved ones lost, along with the photos, the keepsakes, all the memories. Spouses and kids praying each night for their firefighter husband, father, wife and mother: will they come home?” It is that loss, that grief, that suffering, he said, that calls for the strongest package of American climate action ever.

“We have to act as a nation,” said Biden, going on to lay out a robust yet workable plan to fight climate change, put our people back to work and invest in a healthier, more just and equitable future. “It shouldn’t be so bad,” said Biden, “that millions of Americans live in the shadow of an orange sky and they’re left asking: ‘Is doomsday here?’”

Trump, for his part, offered the same kind of quackery that has been so disastrous in the failed U.S. response to the coronavirus pandemic. While meeting in California with officials who noted the ways climate change is making the fires worse, Trump replied, “It will start getting cooler. Just watch. I don’t think the science knows, actually.”

What a perfect summation of the animating view behind Trump’s failure to address the climate crisis and his misguided campaign to roll back U.S. climate progress, break faith with our children’s future and put fossil fuel profits first.

Climate change doesn’t cause wildfires, which can be set off by lightning, sparks from electrical lines, carelessness outdoors or other factors. Climate change can, though, make these fires more devastating.

The nation just wrapped up one of the hottest and driest summers on record. In California, this was the hottest August ever recorded, after more than five years of drought that has killed more than 160 million trees. That kind of dry hot weather saps moisture from soil, trees and underbrush, making it easier for fires to start and spread and harder to put out.

Similarly, tropical storms and hurricanes gather more energy and moisture when they linger over ocean waters several degrees warmer than they’ve been historically. That means, when these storms strike, they pack a bigger punch and drop more rain, as happened in 2017 with Hurricane Harvey, in 2018 with Hurricane Michael and just last month with Hurricane Laura, the most powerful hurricane to make landfall in Louisiana in more than 150 years.

So, too, for the Great Flood of 2019 that inundated Midwest farms, ranches and communities, which were ravaged again this year by devastating windstorms and withering drought.

“It’s ravaged millions of acres of corn, soybeans and other crops,” said Biden. “Their very livelihoods, which sustained their families and our economy for generations, is now in jeopardy. How do they pay their bills this year? What will be left for them to pass on to their kids?”

Biden looks at the climate crisis and sees a human face, “in big cities, small towns, on coastlines or in farmlands.” He also understands how sound climate action can help to counter the injustice and inequity that Black people in this country have suffered for too long.

“The unrelenting impact of climate change affects every single solitary one of us,” Biden said in a speech at the Delaware Museum of Natural History in Wilmington. “But too often the brunt falls disproportionately on communities of color, exacerbating the need for environmental justice.”

That’s why environmental justice will be advanced by Biden’s plan to speed the just and equitable transition we need away from the fossil fuels that are driving the climate crisis and toward clean, smart ways to power our future. His plan calls for investing in underserved communities, to help clean up dirty air and water, strengthen climate resiliency and provide renewable energy and efficiency to low-income communities and create jobs where they’re needed most.

He’ll help us build half a million electric vehicle charging stations nationwide, to help make it easier for consumers to shift to cleaner cars and trucks. He’ll help farmers cut their carbon footprint and lock up carbon in healthy soils. And he’ll help put master carpenters, electricians, masons and others back to work making our buildings less costly to operate and more energy-efficient, while making the people who use them more comfortable.

And Biden will return U.S. participation in the landmark 2015 Paris climate agreement, a first step toward restoring American leadership in the global climate fight.

This is a moment for leadership from someone who grasps the human toll of the climate crisis and rallies the nation around action to avert escalating hazard and harm. From out of the smoldering ashes, the ruined croplands and the prayers of children, Biden hears a common cry for an urgent response, a national call to action that unites us as American people. Come November, it’s on us to back that vision with our vote.