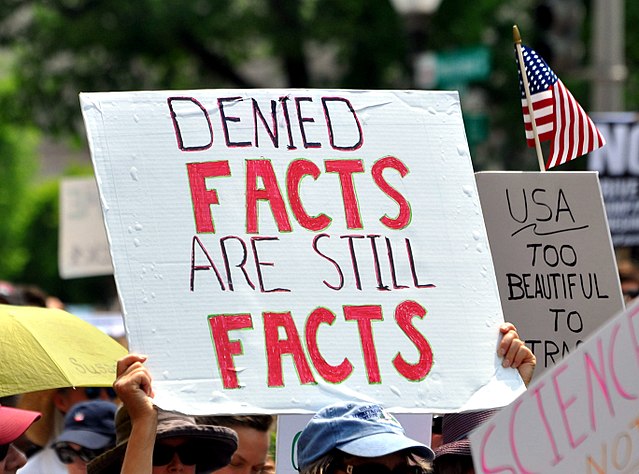 At a recent forum in Washington, leading climate science skeptic Myron Ebell of the Competitive Enterprise Institute told attendees that one of the “dangers” of the Green New Deal is that “it’s creating a very large space for a certain class of people, many of them in the Republican Party, to start talking about how we need to have moderate solutions, or reasonable solutions.” Marc Morano, another prominent climate denier, concurred, saying, “The greatest danger we face right now with the Green New Deal… is very simply the Republican Party coming up with the Green New Deal-lite.”

Their fear that they might be losing the political argument is justified. Poll after poll finds ever higher percentages of American voters expressing alarm about the obvious signs of our rapidly warming planet. And as more Americans both understand the connection to human activity and the need for federal action to curb carbon emissions and avoid climate catastrophe, they increasingly view the climate deniers’ hold on the Republican Party’s positions on these issue as untenable, and way outside the mainstream.

Perhaps sensing stronger political headwinds on climate change and the growing obviousness of the crisis, some Republicans are now speaking up, hoping to wake a party that for years has largely muzzled intra-party debate on climate and clean energy. Two potential primary challengers to President Trump are openly advocating for a conservative policy response to climate change; at a kickoff for his presidential exploratory committee, former Massachusetts Gov. Bill Weld called for the U.S. to rejoin the Paris climate agreement, and former Ohio Gov. John Kasich later echoed Weld, calling for Republicans to embrace climate policies such as cap-and-trade and subsidies for electric vehicles and renewable energy.

There are also signs of change in Congress. Shortly after the midterm elections in November, the new Republican co-chair of the Climate Solutions Caucus, Rep. Francis Rooney (R-Fla.), joined the caucus co-founder, Rep. Ted Deutch (D-Fla.), to introduce the bipartisan Energy Innovation and Carbon Dividend Act.

Rep. John Shimkus (R-Ill.), a once-vociferous skeptic of established climate science, recently told a reporter he’s ready to move past his doubts and look for solutions. “It’s just not worth the fight anymore,” Shimkus said. “Let’s just see what we can do to address it and not hurt the economy.”

On the Senate side, Sen. Lindsey Graham (R-S.C.) and Sen. Cory Gardner (R-Colo.)  recently launched a new Republican environmental caucus to advocate for “market-based approaches” to climate change. Graham has gone on the record in favor of a carbon tax and has previously voted to affirm that human activity is significantly contributing to climate change. Sen. Susan Collins (R-Maine), another leading Republican voice on climate, voted against the confirmation of Andrew Wheeler as EPA Administrator, explaining, “the policies he has supported as acting administrator are not in the best interest of our environment and public health, particularly given the threat of climate change to our nation.” While the rest of the Republican caucus voted to confirm Wheeler, a number of GOP senators have publicly expressed their belief in climate change, largely accepting the scientific consensus on the issue. Sen. Lisa Murkowski (R-Alaska), Sen. Cory Gardner (R-Colo.), Sen. Bill Cassidy (R-La.), Sen. Thom Tillis (R-N.C.), Sen. Rob Portman (R-Ohio), and Sen. Mitt Romney (R-Utah) have all made statements affirming the reality of man-made climate change.

But acknowledging a problem while doing nothing substantive to help solve it isn’t particularly helpful, especially when the problem poses a threat on the scale of global climate change. Too many members of Congress admit that climate change is real while also dismissing the policy proposals on the table as too heavy-handed or expensive, instead pivoting to discussing some vague, over-the-horizon “innovation” as the solution.

Sen. John Barasso (R-Wyo.), the chairman of the Senate Environment and Public Works committee, penned an op-ed in the New York Times after the recent climate conference in Katowice, Poland, in which he argued that lowering carbon dioxide emissions across the globe is necessary, but that any solution must not come at the expense of the fossil fuel industry, nor must it involve a tax on carbon pollution nor any binding international agreements. This Orwellian doublespeak isn’t just dumb policy, it’s denialism by another name. Delaying action in an emergency of this magnitude is simply irresponsible. And it’s increasingly bad politics.

If the GOP hopes to avoid the fallout from the rapidly shifting politics on climate change, it should jettison its climate deniers and unshackle itself from the fossil fuel lobbyists who have helped to paint the party into a corner on this issue. Republicans should acknowledge and embrace the scientific community’s consensus view, and begin to work both within their ranks and across the aisle to seize the economic opportunities in growing a clean energy economy and helping to stabilize our climate for their children, grandchildren, and the generations to come.