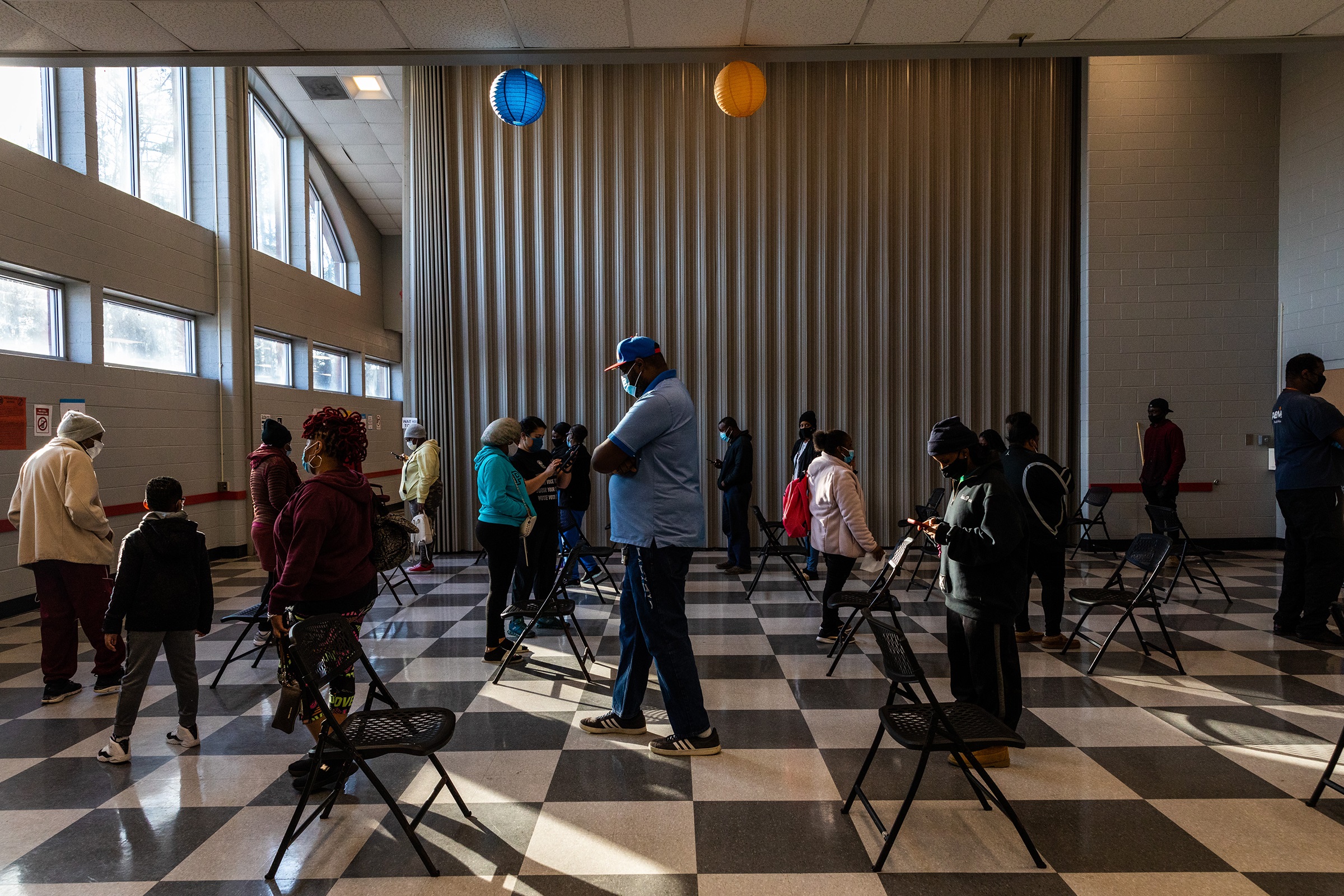 The bill will set standards for federal elections and restore essential voter protections—superseding the wave of state-level hurdles being created by the GOP.

Most of us would regard a 20 percent gain in voter participation, compared to the 2016 turnout, as great news for representative democracy.

To the Republicans who control the state government, though, it was cause for alarm—and urgent action: new restrictions that make it harder for Black, brown, young, poor, and disabled people to vote.

Republican Governor Brian Kemp signed into law last month a set of measures that create new obstacles to voting by mail, prohibit mobile polling places, and ban volunteers from offering water or snacks to people standing in long lines to vote, as often happens in low-income and predominately Black communities across the state.

Kemp fired back that Georgia Republicans were victims of “cancel culture,” a curious turn of phrase for a man who, in his previous role as secretary of state, cancelled 1.47 million voter registrations, in one of the most aggressive voter purges in the country.

“This is Jim Crow in the 21st century,” President Biden said of Georgia’s new restrictions, referring to the patchwork of state laws that institutionalized racist practices in the generations following Reconstruction.

Georgia, though, is far from alone. It’s merely the tip of a long spear aimed at the heart of our democracy. The answer is legislation pending in Congress called the For the People Act. The House has passed it; now the Senate must follow suit.

With overwhelmingly Republican backing, a staggering 361 bills that contain deliberate barriers to voting are pending before legislatures in 47 states, the Brennan Center for Justice reports. From Alaska to Florida, the GOP-backed legislation could create obstacles for tens of millions of voters.

In states controlled by Republicans, however, voting restrictions are moving forward.

The right to vote is the first essential promise of our democracy, the foundational right that protects all others. An attack on that right, for any of us, is an attack on the sanctity of democracy for all of us. It’s an attack on our freedom to vote. That makes each of us responsible for defending that right.

The way to do it is for Congress to pass the For the People Act.

House Democrats passed the measure, without the support of a single Republican, in a 220–210 vote last month. Now it’s pending in the Senate, where some Republicans are trying to kill it.

The bill will set national standards for federal elections. That would supersede GOP efforts to create state-level hurdles meant to discourage voting. And it would help restore and strengthen essential voter protections that were weakened or eliminated by a 2013 U.S. Supreme Court ruling that gutted a key provision of the 1965 Voting Rights Act.

The For the People Act will help protect our voices from being drowned out by corporate money that helped make last year’s presidential and congressional races the most expensive in history—$14.4 billion in all, more than double the spending in 2016, also a record year.

And it will broaden ethics rules to help ensure that elected officials serve the public—not special interests and billionaires.

These commonsense measures will strengthen the voice of the people, improve the quality of our democracy, and support good governance. And, as its name suggests, the For the People Act will make it easier for voters to hold officials to account when they fail to carry out the will of the people.

Perhaps nowhere is that failure more apparent than in the protection of the environment and public health.

Two-thirds of Americans want the federal government to take action to fight climate change, 7 in 10 favor higher fuel efficiency standards for cars and 80 percent support standards to clean up our dirty power plants—measures that wealthy fossil fuel interests have worked for years to obstruct.

President Biden is following through on the strongest such action ever, but only in the face of solid Republican opposition in Congress and in the wake of a GOP administration that just spent four years working relentlessly to roll back environmental progress.

Seven in 10 Americans support the $1.9 trillion pandemic relief package Biden signed last month, but not a single Republican in the House or Senate voted for the desperately needed aid.

And yet, when Biden laid out his vision to do that and more—in a plan independent economists say will create 15 million jobs—Senate Republican leader Mitch McConnell of Kentucky was quick to say his party opposes the plan and will fight to defeat it.

For that matter, party leaders are fighting to defeat the For the People Act in the Senate as well, over the objections of more than two-thirds of likely voters who support the bill, including a solid majority of self-identifying conservatives.

Instead of backing policies the people support, Republican leaders seem intent on trying to change the rules to quiet the voice of voters seeking progress and change.

“This is democracy in reverse,” Senator Warnock said. “Rather than voters being able to pick the politicians, the politicians are trying to cherry-pick their voters.”

There’s nothing more fundamental to the working of our democracy than the right to vote. The Republican campaign to suppress that right for people of color, low-income communities, and youth goes well beyond partisan politics. It’s the work of a party that has gotten itself crossways with our identity as a nation, has become contemptuous of the plight of the poor, and is frightened of the future.

That’s not leadership. It’s a pernicious tide we must turn back. Tell your senators, regardless of party, that you support the For the People Act, and that you expect them to support the people.

Mitch Bernard is president of the NRDC Action Fund.

Liz Cheney is no friend of a healthy environment. Last year alone, the Wyoming Republican voted against critical measures…

This week marks the 50th anniversary of the Woodstock music festival, but there was more to the summer of ’69 than…