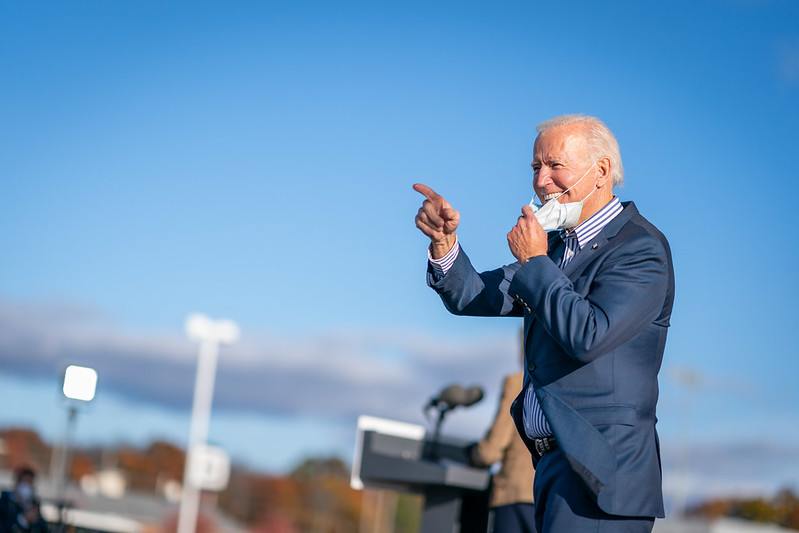 The next presidency and the next Congress will be driven, if not defined, by the grinding pandemic, its economic fallout and the need to address racial injustice. Layered atop those intertwining crises is yet a fourth: climate change.

The climate crisis is already upending so many American lives, from the heartland to the sea. It will only get worse, the science tells us, without bold and swift action.

Whether and how we respond is on the ballot this election. We need to send a leader to the White House, and legislators to Congress, that understand the rising costs and mounting dangers of climate change. We need to elect leaders who will seize the opportunity to strengthen the economy and create jobs by taking action to address it. We need leaders who will put people’s health before polluters, and give our children the hopeful future they deserve.

We need to vote Donald Trump out of office, and Joe Biden in.

For well over a decade, a rising chorus of Americans has made the case that fighting climate change should not be a partisan issue.

President Trump and his party, however, have responded by fanning the flames of climate change at every turn.

He’s turned away from sound policies to reduce the carbon pollution that’s driving climate change by weakening or gutting commonsense standards to help clean up our cars, trucks and dirty power plants.

He’s put our health—and our children’s health—in danger, by dismantling protections that make our air healthier and our water cleaner, and protect us from toxic pollution, like mercury, emitted by the fossil fuel industry.

And he’s withdrawn the U.S. from the 2015 Paris climate agreement, the single most important step the global community has taken to address this threat.

As the alarm bells grow louder, this administration and its Republican enablers have persisted down this dangerous road.

They have not been moved by rising temperatures making heat strokes, asthma attacks, heart problems and insect-borne diseases like Zika virus and dengue fever more likely. They have not been moved by the coronavirus respiratory pandemic that is proving especially deadly for those living with high levels of fossil fuel pollution in their communities.

And they have not been moved by the injustice and inequity of the fact that both Covid-19 and climate chaos are taking a disproportionate toll on Black, indigenous, Latino and other people of color.

They have not been moved by any of this suffering. So it’s time to move them out.

It’s time to elect leaders who understand both the stakes in failing to act and the opportunity of taking action. As we struggle to get our economy humming again, we need leaders who will invest in lasting recovery that makes us healthier, more prosperous and more likely to thrive. Leaders who know the single best way to do that is to invest in a just and equitable transition we need to shift away from the fossil fuels that are driving climate change and to cleaner, healthier ways to power our future.

Nothing has more potential to turbocharge a recovery that’s strong, durable and creates jobs in every community in America than clean energy.

As the pandemic broke out, nearly 3.4 million Americans—three times more than the fossil fuel industry—were working to help us use energy more efficiently, build more electric cars and trucks, get more power from the wind and sun and modernize our electricity grid and storage system.

Former Vice President Joe Biden and his party have a plan to put millions more to work advancing these goals, positioning U.S. workers and companies for success in a clean energy market on track to draw $11 trillion in global investment over the next three decades.

This is the economic play of our lifetime. It’s the path to broad-based recovery that lasts. It can help advance racial equity. And it can help avoid climate catastrophe.

The Trump administration and Republicans in Congress are letting it pass us by.

Joe Biden, meanwhile, has a plan to capture the promise of clean energy, protect our health, and stand up for the most vulnerable of our people, starting on Day One. It’s the strongest we have ever seen from any president in our nation’s history.

This is the leadership we have been waiting for.

Gina McCarthy, the former administrator of the U.S. Environmental Protection Agency, is president and CEO of the NRDC Action Fund