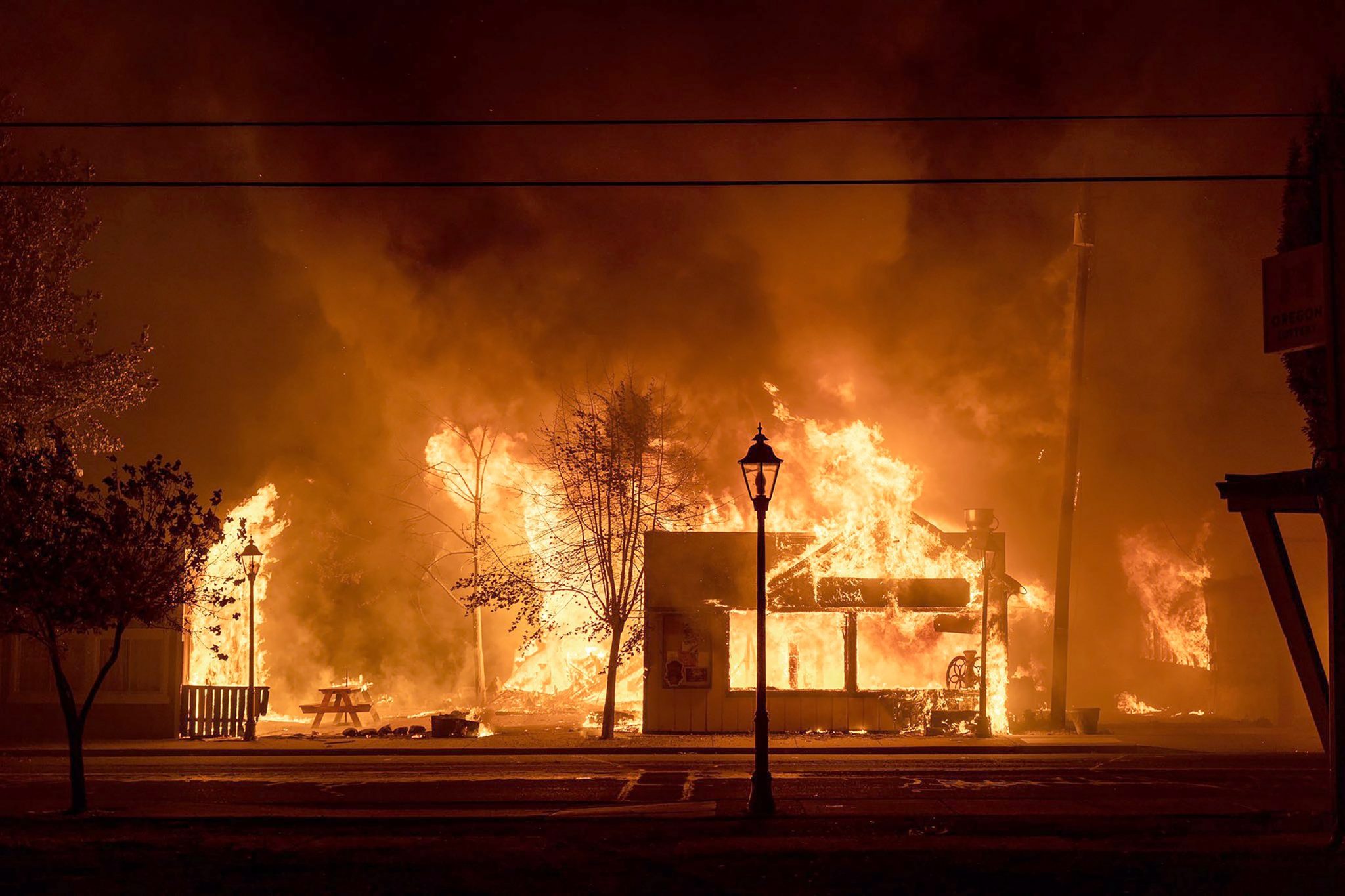 Voting for Joe Biden is the most important individual action each of us can take this year to affect our climate future for the better.

The West Coast is burning, toxic smoke is choking the air from the canyons of Los Angeles to the Puget Sound, and a stunned nation is struggling to make sense of scenes of the Golden Gate Bridge against what looks like the skyscape of Mars.

Mother Nature’s message is clear: Climate change has arrived and we must act NOW.

Instead, with dozens dead, hundreds of thousands of people fleeing their homes, millions of people struggling to breathe indoors, and wildfires torching five million acres from the hills of San Diego to the Washington State Cascades, President Trump was in California yesterday paying lip service to an epic American disaster.

There, he continued to refuse to acknowledge the role of climate change in the record-setting fires still burning. Sadly, it’s not surprising from a man who has publicly peddled multiple snake oil cures to COVID-19. And—just as he’s done in response to the coronavirus pandemic—over the last four years, Trump has not only denied the climate crisis, but he has also done everything in his power over the last four years to make it worse, leaving our people to pay the price.

These massive fires and the toll they are taking on the lives of people out West show exactly what we mean when we say climate change is not a planet issue—it is a people issue. And this is why we say we have to act boldly and quickly. Because the impacts are here—and they are only going to get worse if we don’t.

But the Trump administration has slept through all of the wake-up calls. Now we’re staring at a full-on climate crisis, with civilization itself in flames, climate change blasting “a blowtorch over our states,” as Washington governor Jay Inslee put it Sunday, “making fires start easier, spread faster, and intensify.”

To add insult to injury, Trump’s visit to California this week comes after his administration has spent the past couple weeks patting themselves on the back for being great environmentalists. With the fires already burning, Trump’s EPA administrator was in California less than two weeks ago touting his nonexistent green accomplishments. And last week Trump himself was in Florida trying to gaslight voters and calling himself “a great environmentalist.”

More than casting an apocalyptic pall, smoke from wildfires can aggravate serious health conditions, like respiratory ailments, heart disease and stroke. That’s a constant and growing hazard for construction workers, road maintenance crews, and others who have no choice but to work outside. Harvest is in full swing for many of the fruits, vegetables, and nuts produced in the region, and farmworkers in affected regions are choking down toxic smoke every time they take to the fields to pick the food we eat.

And now it’s happening in the middle of a respiratory pandemic, one that we know hits people exposed to polluted air—disproportionately low-income Black communities and other communities of color—the hardest. And it’s happening while the nation’s hospitals and emergency response systems are already strained by the demands of the outbreak.

Yet President Trump has been busy over the past six months of the COVD-19 crisis: continuing to fan the flames of climate change. From rolling back plans for cleaning up our cars and dirty power plants to hawking the fuels that are cooking the planet, he’s been hell-bent on making it worse, mocking its victims, disparaging those who offer grounded solutions, and undermining clean energy progress.

Only last month, Trump treated the devastation as a political punch line, blaming the fires on California’s leaders, belittling the suffering the fires have caused and threatening to withhold federal aid as partisan payback. “Maybe,” Trump said at a Pennsylvania campaign rally, “we’re just going to have to make them pay for it because they don’t listen to us.” 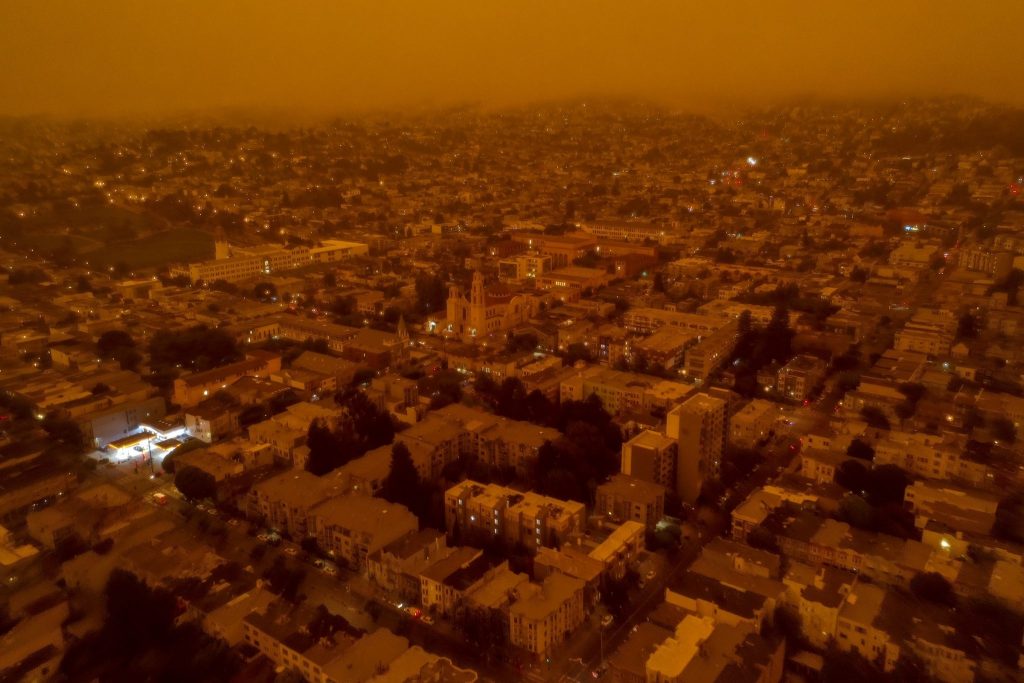 With California battling three of the four largest wildfires in the state’s history, Trump went on to lecture state officials. “You gotta clean your forests,” Trump said at his August rally, reprising his baseless 2018 call for more “raking and cleaning” of the California forests, made as he visited the ashen remains of Paradise, where the worst U.S. wildfire in a century killed 85 people and burned 11,000 homes to the ground.

Here are the facts he is choosing to ignore:

It is absolutely inexcusable that a sitting President is willfully ignoring these facts while his people are suffering and dying. And we have a chance to send that message loud and clear in less than two months.

It’s time to vote Trump out of office, and vote Joe Biden in.

Because the impacts of climate change—from wildfires to drought to hurricanes to flooding—threaten every corner of this country. No one and no place is immune. As Biden put it, addressing the wildfires in his own speech from Delaware yesterday, “Hurricanes don’t swerve to avoid red states or blue states. Wildfires don’t skip towns that voted a certain way. The impacts of climate change don’t pick and choose.”

With dozens dead, hundreds of thousands fleeing their homes, and millions struggling to breathe indoors—President Trump continues to deny that climate change is fanning the flames while doing everything in his power to fuel it. https://t.co/lExhli2Mjf

Let me be clear: The act of voting for Joe Biden is the most important individual action each of us can take this year to affect our climate future for the better. This is it. And here’s why: Biden understands what’s at stake and what we need to do to keep disasters like these from getting ever more destructive and common.

He understands we need national action to shift the country and lead the world away from the fossil fuels that are driving the climate crisis and threatening to turn ever widening reaches of our country into a blazing inferno.

He knows that we can rebuild ourselves stronger in the face of the multiple crises we are facing today by investing in clean energy and energy efficiency, building more all-electric and hybrid cars, and building an electric grid and storage systems for the 21st century.

And he has a plan ready to go on day one that will do just that—the strongest climate plan we have seen from any president in U.S. history. Ever. It will invest in a healthier, safer, and more hopeful future for ourselves and our children. And it will do so in a way that helps to get our economy back on its feet, advances racial justice and equity, and creates jobs in every community in the country.

Meanwhile, Trump has fought this agenda tooth, nail, and hair. He is showing us exactly what we can expect if he is reelected. As Biden put it: “If you give a climate arsonist four more years in the White House, why would anyone be surprised if more of America is ablaze?”

We cannot afford to give him that chance. Now, more than ever, we need a leader who cares about people—and does everything in their power to protect them.