What an Electric F-150 Means for America

As the unveiling of Ford’s electric vehicle shows, the U.S. shift to EVs has started—but it’s just the beginning of our cleaner future.

President Biden’s visit to Ford’s new Rouge Electric Vehicle Center in Dearborn, Michigan, this week marks a bright future for U.S. automotive jobs and clean air. The United States will become a global leader in building and selling pollution-free electric cars and trucks if the industry and federal government come together to make it happen. We can do this. The formula for success is establishing strong vehicle standards and passing the American Jobs Plan with robust incentives for domestic electric vehicle (EV) manufacturing, consumer purchases, and charging infrastructure.

President Biden is doing what the best political leaders do: preparing us for the future, inspiring our ambitions, and elevating policies and ideas that make life better for all. And it’s what Americans want.

Voters across the country overwhelmingly support the American Jobs Plan. Eight in 10 voters nationwide support investments in creating clean energy jobs, with strong majorities of support in every state, whether red or blue.

They also support the transition to zero-emission electric vehicles, as well as federal action to spur it along. Nearly 40 percent of Americans say they are likely to purchase an electric vehicle within the next decade, with many of the holdouts citing the lack of charging stations as a significant barrier. The investments in Biden’s American Jobs Plan directly address these concerns and could go a long way toward speeding the adoption of pollution-free EVs.

The Biden American Jobs Plan proposes to “[r]revitalize manufacturing, secure U.S. supply chains, invest in R&D, and train Americans for the jobs of the future.” To remain competitive and meet our climate goals, the vehicle fleet must transition from gasoline and diesel cars and trucks to electric vehicles. As showcased by this week’s unveiling of the Ford F-150 Lightning EV, the shift to EVs has begun, but the United States is already behind Asia and Europe when it comes to producing high-value EV components like batteries. Like the union-supported vehicle assembly jobs, the United States must capture the battery supply chain and create good, family-supporting jobs.

Manufacturing incentives under the American Jobs Plan help establish a domestic EV supply chain to build EVs for both American and global car buyers. The plan contains bold manufacturing federal tax credits, loans, and grants for retooling and expanding American plants to make electric vehicles and their components and for training and employing workers. These investments will create the high-quality jobs of the future.

Importantly, Biden’s plan also would make historic investments in transit, intercity rail, affordable housing, and safe streets and paths for cyclists and pedestrians. We’ll need all these options to address the inequities in our transportation system, curb pollution, and allow everyone to get around.

Speed and scale are imperative for meeting the international competition and tackling the challenge of climate change. For example, there are more than 270 million vehicles on U.S. roads that we need to transition to zero emissions by 2050. Their EV replacements will be built in America if we make it easier for individuals and businesses to purchase them. The American Jobs Plan is a good start, but we should expand upon existing tax credits for electric cars and create credits, rebates, or grants for freight trucks, school buses, and transit buses. People buying used cars should also have access to purchase incentives. The American Jobs Plan can give all Americans access to pollution-free vehicles. 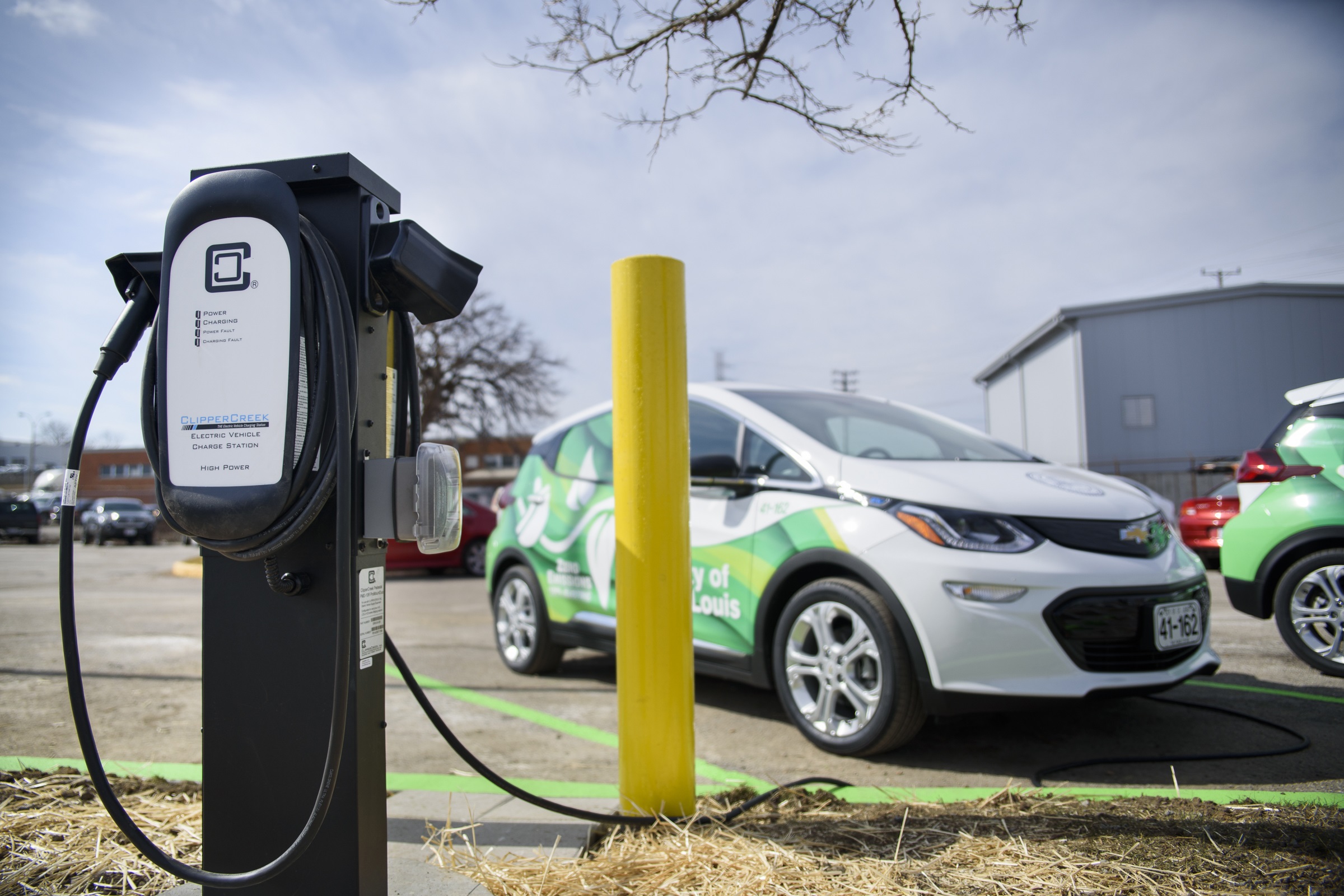 A Chevy Bolt, part of the City of St. Louis’s new zero-emissions EV fleet, charges up outside of the St. Louis City Street Department on February 25, 2021. (Nick Schnelle for NRDC Action Fund)

Building the American Infrastructure of the Future

Electric vehicles—while predominantly charged at home or work—will also need to get “fueled” along the nation’s highways. Transit hubs, commercial fleets and ports also need to be upfitted with electric chargers. As part of President Biden’s pledge to deploy 500,000 charging stations within 10 years, investments under the American Jobs Plan will employ workers to design, manufacture, and install the electrical infrastructure to power clean transportation. EVs are the only vehicles that get cleaner over time as U.S. power is increasingly sourced from renewable wind and solar generation.

Emission Standards Are the Foundation

Vehicle-pollution and fuel-economy standards have a track record of ensuring automakers provide consumers with vehicles of all types that pollute less and save money at the pump. The annual U. S. Environmental Protection Agency (EPA) Automotive Trends report demonstrates that the Obama-era standards delivered vehicles that consume less fuel and pollute less.

Long-range federal standards give the automotive industry certainty about expected pollution reductions that can inform yearslong planning and broad supply-chain investments. And the standards create a level playing field among competitive manufacturers that encourages ongoing innovation.

Now it’s time for the Biden administration to re-establish those Obama-era standards and set new ones that set a pathway to pollution-free vehicles. At a minimum, new clean car standards should cut emissions by 60 percent compared to today’s vehicles by 2030. By 2035, new cars should be 100 percent pollution-free.

These standards will combine with federal investments to bring about the most robust cuts ever in carbon pollution from vehicles, according to a recent analysis by the Rhodium Group. “Our results show that if Congress implements a robust, decade-long EV incentive, there may be no incremental cost for most consumers of getting on a path to 100 percent” zero-emissions vehicles, according to the Rhodium report. “The Biden administration can pursue more aggressive regulatory requirements than ever before without raising consumer costs and generating net economic benefits.”

Importantly, if done right, those economic benefits mean more high-quality U.S. jobs. Now is the time to go big—to be global leaders in clean, electric vehicles. And the American Jobs Plan can help us meet this moment.