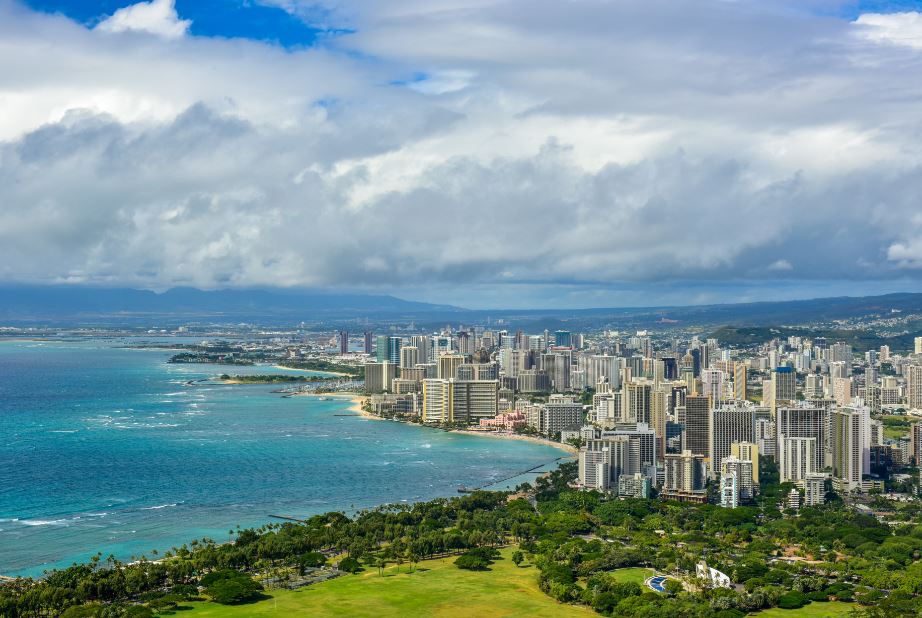 The NRDC Action Fund is driving climate action in cities across the country through The American Cities Climate Challenge. This post is written by Maria Stamas and Elizabeth Stampe.

Update, May 21: The Honolulu City Council passed Bill 25 yesterday afternoon! Dozens of members of the public spoke up in support of this climate forward policy (remotely given the social distancing provisions currently in place), and Councilmembers passed it unanimously! Moving forward, new construction in Honolulu will be cleaner, more affordable, and safer for Honolulu residents.

Honolulu’s City Council has a choice to make this week. Will it adopt forward-looking requirements for builders, giving residents access to clean, affordable energy in buildings that reflect Hawai‘i’s culture and climate—and also help people save money on their monthly bills at a time when so many are struggling?

Up for consideration is the City’s energy code, which was introduced to Council a year ago and passed unanimously out of committee in February with a few concessions. Since then it has been on pause to make way for City COVID-19 response, but the City Council is bringing it forward next Wednesday for what we hope is the final vote to pass Bill 25.

Building energy codes set basic safety, health and efficiency requirements for builders and developers as they create new homes and buildings, buildings which will become part of the community fabric for the next fifty years or more. Bill 25 updates Honolulu’s code to require that new buildings be significantly more energy efficient, which could cut monthly utility bills in half for residents. Bill 25 also requires “solar-ready” roofs and some “EV-ready” parking – low cost measures that expand access to solar panels and chargers for electric vehicles (EVs), and unlock big additional savings that residents can get by installing these technologies.

Please act today.You can help get a strong Bill 25 over the finish line. To help, express your support to the City Council here – or call your Councilmember – before the bill is heard at a special City Council meeting Wednesday, May 20. We also recommend calling for stronger requirements to give more people access to EV charging.

A Future that Gets it Right the First Time

As Honolulu looks toward a much-needed economic recovery, Bill 25 offers a way to lower costs for residents with cheaper energy bills. With Bill 25, new construction will also help the island build its way out of the climate crisis instead of making it worse. The draft ordinance up for adoption by the full City Council should create significant island-wide benefits in the form of cleaner air and new clean-energy jobs.

Residents want action. Over 74 percent of O’ahu residents support building codes that include energy efficiency, solar hot water heating, and EV charging, even if they cost more up front but result in lower energy bills, according to a 2019 public opinion poll.

The requirements proposed, though important, are just a first step if Hawai‘i is to meet its ambitious climate goals and keep costs affordable.

Today, Hawai‘i is the most oil-dependent state in the nation. Importing oil across thousands of miles costs more on many levels: the infrastructure needed, the operating costs, the high carbon intensity of the fuel and its infrastructure, the high risks of spills, and the associated pollution.

But there’s another way. Energy-efficient building techniques and appliances; water heated by solar power; and renewably supplied electric vehicles are not only cheaper to run, but they avoid the health and safety consequences of fossil fuel alternatives and the need for costly imports. Today, $5 billion a year goes toward importing oil to Hawai‘i – Bill 25 will help keep that money circulating in the local economy.

Honolulu’s administration would like to save energy by bringing its code into line with the 2015 International Energy Conservation Code, a model code recently adopted by the state. Honolulu is also proposing to add some specific local amendments to get the city ready for a clean-energy future.

Bill 25 would provide the option for developers to create naturally cooled homes and buildings and uses a point system that rewards efficient appliances, large lanais, and compact homes. This would encourage the use of simple building measures like fans, additional window glazing, and shaded reflective walls.

The best part? These improvements would cut residents’ energy bills by more than half.

The PV wiring builds on a state law requiring solar hot water heaters in most newly constructed single-family homes, making it cheap and easy for homeowners to add the actual PV panels. While the state has required this for over a decade, a loophole has made the requirement functionally moot. However, recent court cases and a renewed effort by the state’s Energy Office will be making good on the law’s intent that variances “will be rarely, if ever, exercised or granted.”

Together, these provisions mean residents could expect to avoid the equivalent of 26 ­- 47 barrels of imported oil and save between $4,200 and $8,800 over a typical water heater lifetime of 15 years.

Honolulu residents are more than ready for electric vehicles, with O‘ahu seeing among the highest take-up rates of electric vehicles (EVs) across the United States. By 2030, the City anticipates more than 22,000 EVs on its streets. But residents, especially renters, can’t do it all themselves—their housing infrastructure needs to support vehicle charging.

Honolulu’s updated energy code would provide this much-needed support by requiring businesses and some homes to support the transition to clean EVs:

Why now? Because getting electric vehicle infrastructure right the first time is critical. The cost of rehabbing buildings and parking infrastructure for EVs is far higher than designing it in from the start.

Getting Bill 25 Over the Finish Line

Honolulu has committed to meeting its energy needs with 100 percent renewable energy by 2045. Given that new housing and building infrastructure lasts over 50 years, the time to start setting more ambitious guidelines for new construction was 25 years ago—but 2020 will suffice.  With rising seas, a worsening hurricane season, struggling coral reefs, and varying supplies of drinking water, the state is already feeling the effects of climate change.

Fortunately, Hawai‘i is naturally poised with abundant sunshine to power these solutions. Passing Bill 25 is a critical step to help Honolulu meet its climate goals, reduce costs for residents, and become more resilient.

Interested in helping Bill 25 over the finish line? The final reading of Bill 25 will be on Wednesday, May 20; before then please express your support to City Council here.