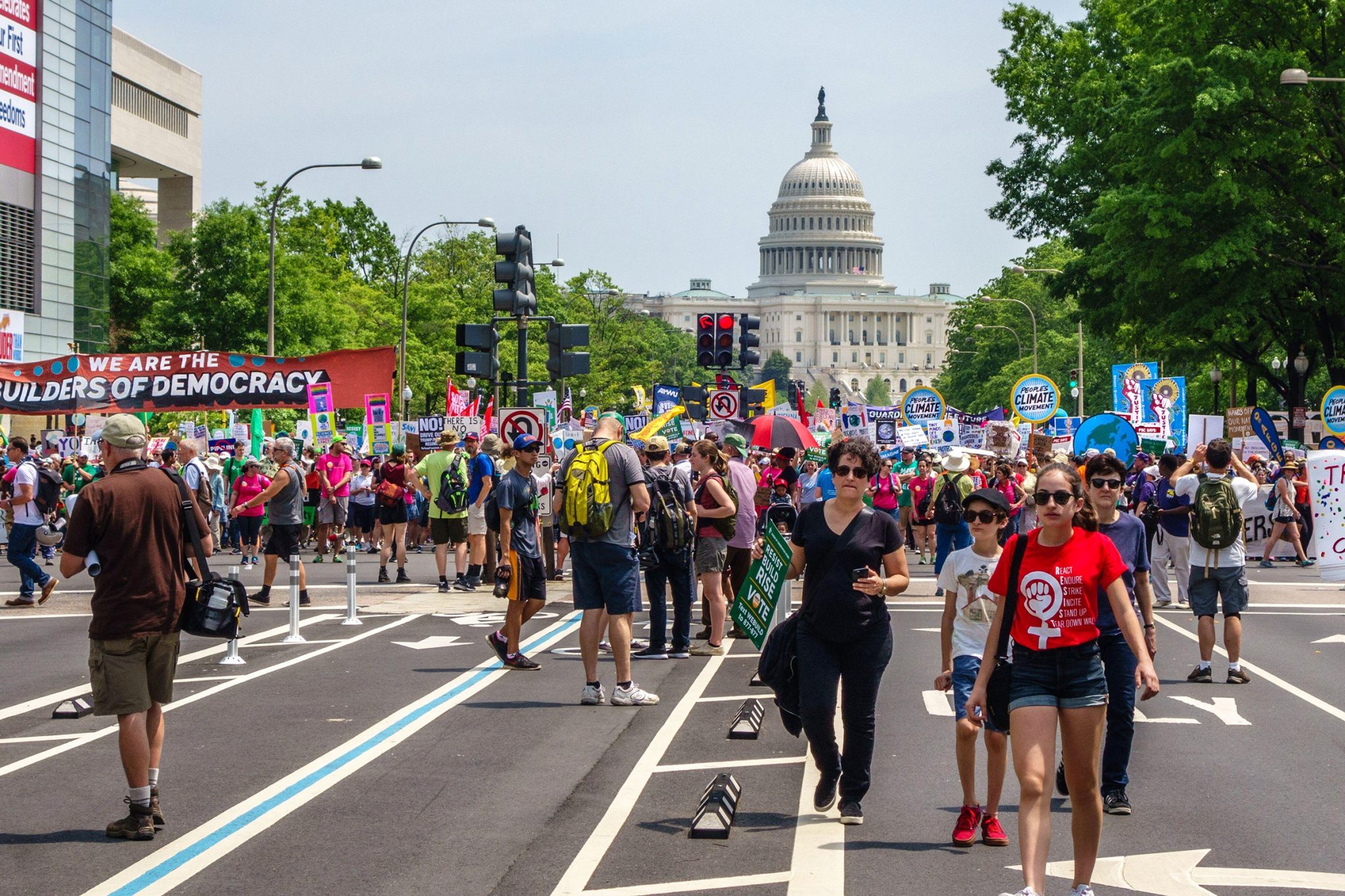 Climate-conscious voters are growing in number—and expecting real action on what the president-elect calls “one of the greatest battles of our time.”

The 2020 election, conducted amid a deadly pandemic, economic upheaval, and a racial justice crisis, will go down in history for many reasons, but it’s also the first presidential election in which climate change emerged as a top priority for voters and, not coincidentally, for the candidates who won: Joe Biden and Kamala Harris.

In his acceptance speech Saturday night, President-elect Biden named the fight against climate change as one of the “great battles of our time.” His battle plan involves “marshaling the power of science,” investing $2 trillion in developing an equitable clean energy economy, and eliminating carbon emissions from the power sector by 2035—and a sizable chunk of the electorate is on board, approving of the plan by a whopping 40 points.

Polls conducted in mid-October registered climate change as something 25 percent of the population considers to be a personal issue of extreme importance, and according to a Marist poll of likely voters, 22 percent of Democrats and 11 percent of Independents rank climate change as their number one issue. Such a climate-first voting bloc could have clinched millions of votes for the Biden/Harris ticket in what became an election of very slim margins. Notably, among Democrats and left-leaning Independents, 78 percent of those surveyed by the Pew Research Center said tackling climate change should be a top priority for the president and Congress—up 32 points from 2015.

A lot has happened since 2015, of course. By year’s end, 195 nations had signed the Paris Agreement in an effort to keep average global temperature rise below 1.5 degrees Celsius. The Intergovernmental Panel on Climate Change laid out, in startling terms, the urgency of that goal in its 2018 report. By then, President Trump had been busy withdrawing the United States (the world’s second-largest carbon emitter) from the Paris accord and steadily rolling back environmental policies that help keep fossil fuel pollution in check and encourage industries to move toward cleaner technologies. Heat records broke and then broke again, sea levels continued to rise, and wildfires and hurricanes raged. Communities flooded, burned, and sank.

And all the while, a global movement of young climate activists—led by groups like Sunrise Movement, Zero Hour, and Fridays for Future—grew bigger, louder, and more organized.

Students went on strike. Protestors staged sit-ins in congressional offices. Teenaged Nobel Prize nominee Greta Thunberg warned slow-moving world leaders that our house was, quite literally, on fire. The Green New Deal became a household name. And in the fall of 2019, young people led the largest climate protest ever, with four million activists worldwide taking to the streets, from the Philippines to Phoenix to Philadelphia.

Groups like the NRDC Action Fund and Climate Power 2020 worked hard to make sure this growing green wave of supporters was heard on Election Day. For Isaias Hernandez—a Los Angeles–based environmental activist and Instagram influencer who works with Climate Power 2020—this meant ensuring the topic of climate change got its due this election by pushing for climate questions during the debates, debunking Trump’s many lies on U.S. environmental policy, and regularly reminding voters that their futures were on the ballot.

Their efforts have proven successful: Not only did Biden present the most ambitious climate plan of any presidential candidate to date—one informed by the expertise of scientists and leaders in the climate and environmental justice movements—but the climate crisis also got more prime-time coverage during the presidential debates than ever before.

Said NRDC Action Fund President and CEO Gina McCarthy in the Washington Post last week, “Joe Biden ran on climate. How great is this?” It is great, and it worked.

According to preliminary data from Tufts University’s Center for Information & Research on Civic Learning and Engagement (CIRCLE), young people, ages 18 to 29—who are more likely to prioritize climate change—voted in higher numbers this November than any election in decades. And young people of color, who voted overwhelmingly Democratic nationwide, appear to have been particularly critical to Biden’s performance in battleground states. For instance, in Georgia, 90 percent of young Black voters chose Biden, who is currently leading in the state by more than 14,000 votes.

An emphasis on addressing the intersections of environmentalism, feminism, and racial justice in recent years has also helped these movements reach and mobilize more supporters. “Environmental justice cannot wait,” Hernandez says. “I really look forward to having an administration that actually believes in environmental racism, that actually supports low-income communities, and is willing to invest the resources into addressing these issues.” 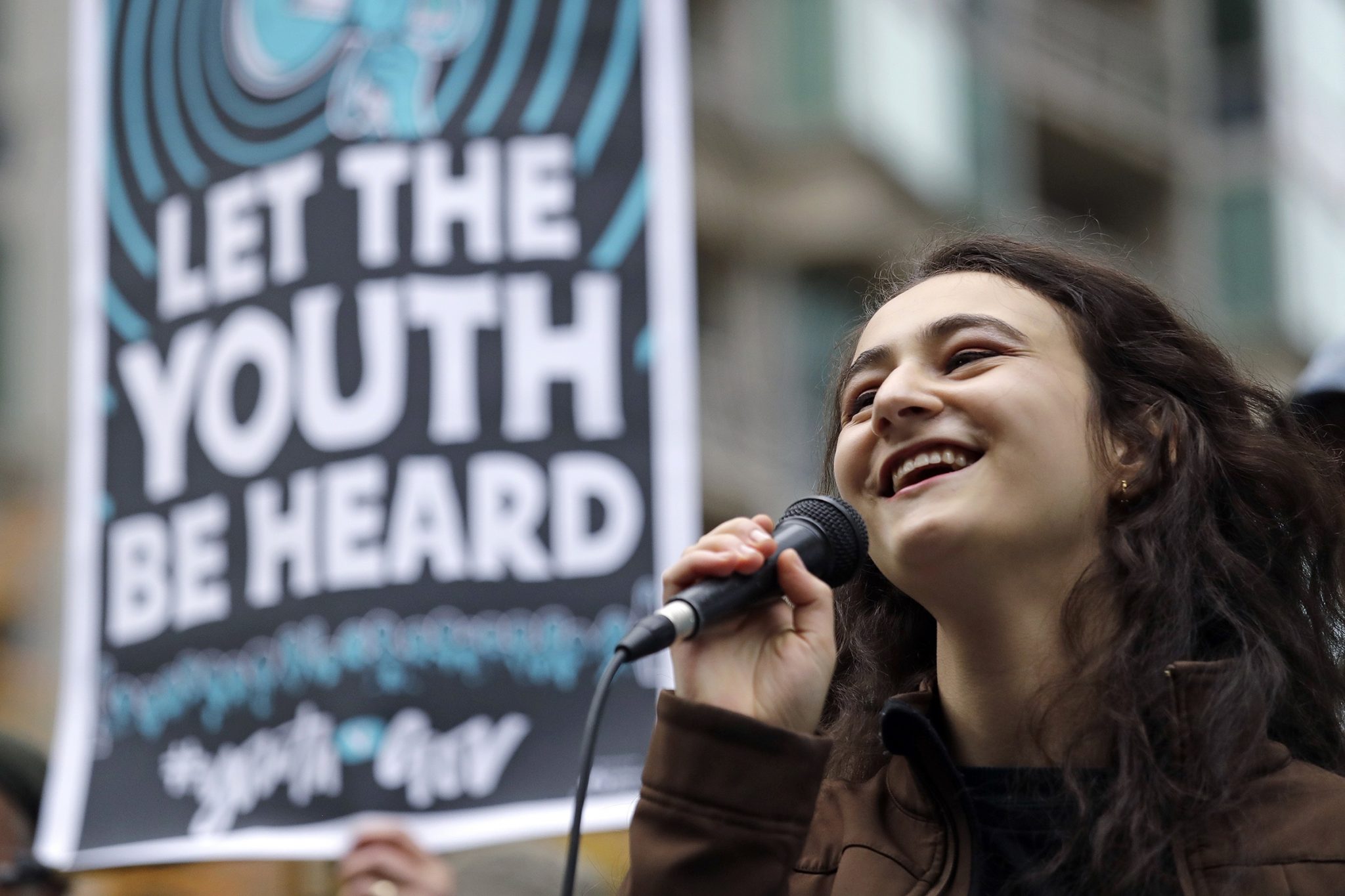 Jamie Margolin, a high-school junior, speaks during a rally by youth activists and others in support of a high-profile climate change lawsuit. (AP Photo/Elaine Thompson)

Progress on the climate front, of course, requires more than a willing president. Two dozen candidates who campaigned on clean energy and climate for seats in the Senate and House of Representatives are celebrating victories too. This election also saw a number of pro-environment down-ballot measures, including some in Republican states, pass with wide margins.

In San Antonio, Texas, voters approved a proposition to fund public transit projects in their rapidly growing city. A measure to amend Nevada’s state constitution to require electric utilities to generate half of their energy from renewable sources also passed. Seventy-six percent of voters in Columbus, Ohio, approved a program that allows residents and small businesses to purchase renewable electricity at bulk rates—something that will help the city move closer to its 100 percent clean energy goal by 2022 while creating local jobs in the renewable energy sector.

The 2020 election may very well be a turning point for climate action, but Anaïs Peterson, a young activist who has been working to fight the expansion of petrochemical facilities around Pittsburgh, cautions that the fight is far from over. “My fear is that people will go back to their complacency,” she says. “It’s going to fall on all of us, as always, to really show up and constantly demand better.” That’s true no matter who is in office.

The climate threat, after all, isn’t going anywhere anytime soon. The country will continue to experience the consequences of a warming world, and the future of its younger generations remains in the balance. This is just the beginning of climate voters making their mark on U.S. elections.